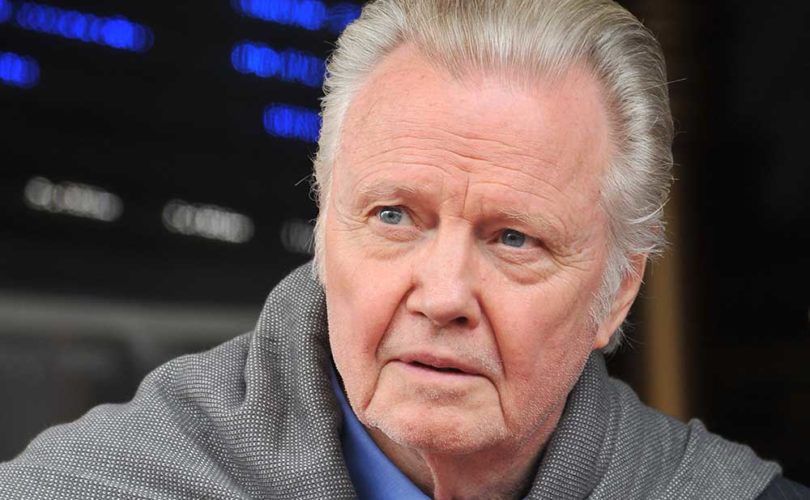 October 22, 2015 (LifeSiteNews) – The word “progressive has been mentioned a lot in recent months in politics, academia, media and more.  It has especially been frequently mentioned prior to and during the Vatican Synod on the Family as a self-described label of the most liberal or dissident faction of Cardinals and bishops at the Synod.

Most of the public, as LifeSite has noted before, have no idea what the innocuous and harmless sounding word means. In reality, however, some notable individuals such as actor Jon Voight, the Catholic Hollywood actor who played one of the most convincing ever portrayals of Pope John Paul II, have made it a point to warn the public about the concerning real source and meaning of the manipulative term.

Breitbart news Wednesday reported that Voight, in an interview, said he “feels the political left uses the term “progressive” as a substitute for “communist.”

“There are a lot of conservatives in Hollywood, and they’re not very welcome,”, Voight is quoted by Fox news as saying in the December issue of Cigar Aficionado.

The famous actor  has long been known to identify as a conservative and has therefore been targetted within the industry for being out of line with the dominant ideology in the film industry.

Voight stated that “actors with patriotic thoughts have a difficult time finding a home in the industry” and then exposed what the word “progressive,” that many in the industry prefer to use to describe themselves, really means in his view.

He is reported to state, “I think the word ‘progressive’ is a very devious term.”

“What they propose is the reverse of progress. It’s some that does taste of communism and Karl Marx’s pernicious philosophy,” he added.

Voight is not far off the mark as revealed by Goerge Neumayr in a February 2014 LifeSite article titled, “‘Progressivism’: the greatest source of death and terror in the twentieth century”

The English author George Orwell wrote that “political language is designed to make lies sound truthful and murder respectable, and to give an appearance of solidity to pure wind.” In the history of manipulative political language, the term “progressive” surely occupies a high place.

The term is used incessantly to describe policies, political figures, and churchmen, among others, whom a liberal elite deem enlightened. Through repetitive use of “progressive,” modern liberals have hoped to gull the public into equating progressive with progress. But no such equation is justified.

The darkness of the twentieth century is sufficient to dissuade anyone from confusing “progressive” with progress. Its vilest ideologies were all presented as “progressive.” In the name of bettering humanity, self-described progressives felt emboldened to “progress” beyond the most basic precepts of reason and the natural law.

Dr. Anca-Maria Cernea, who made a startling presentation at the current Synod on the Family, as reported by LifeSiteNews, sees the “progressive” forces within the Church to be having a large negative influence at this time.

In her presentation, Dr. Cernea warned the Synod bishops and Pope Francis about the need to recognize the dangerous language used by enemies of Christian culture in the world today. She stated,

I am concerned by the fact that the Church is accepting, or including without paying attention, some parts of ideological language. With this language comes a message. We may not be aware of the power [that is behind] the choice in terms.

But we in Romania have this experience, because we have been living under a Communist regime. We sense when something sounds ideological and doesn't have any contact with reality in which we live

There is continuity from Lenin’s sex revolution, through Gramsci and the Frankfurt school, to the current-day gay-rights and gender ideology.

This ideology calls itself progressive. But it is nothing else than the ancient serpent’s offer, for man to take control, to replace God, to arrange salvation here, in this world.

It’s the task of the shepherds to recognize it, and warn the flock against this danger.

Neumayr quotes Clinton's innocous, attractively sounding definition of what she wants the public to believe that she means by the term, but Neumayr explains,

Her vague definition of progressive makes it sounds wholesome and harmless, as if progressives stand for nothing more than up-to-date food inspection standards and a robust civil society.  In truth, progressivism sparks off secularist and socialist notions of human perfectibility and social engineering divorced from God and the natural moral law that have proven disastrous for the human race.

As it concerns the Catholic Church, Neumayr states that modern “progress” in the Church “is not measured by growing adherence to holiness and truth but by departures from them. It crowns churchmen “progressive” if they appear to be substituting modern liberalism for orthodoxy. “

The author's research and experiences in this area cause him to emphatically warn that,

The incorporation of modern liberalism into Catholicism is the destination point toward which “progressives,” both inside and outside the Church, wish to go.

Moving beyond “truth and falsehood” into an alliance with the “world” is the antithesis of the Church’s mission. But progressives, such as Hans Kung or the leading dissident National Catholic Reporter paper in the US, drawing upon a Darwinian conceit, will always claim that the latest development, whether in religion or politics, is the best one. All changes are cast as perfective, not destructive.

His last comment, one that seems uncomfortably familiar to those following the disturbing developments in the Church from last year's Synod on the family up to and including the disputes and outrageous proposals and statements during the current Synod:

“Progress,” as applied to politics and religion, falls into Orwell’s category of self-serving rhetoric designed to silence opposition to whatever is under proposal. It should at the very least invite skepticism, not submission.

Thanks to John Voight, George Neumayr and Dr. Anca-Maria Cernea, more people should be much awakened to this dangerous movement in the culture and in the Catholic Church that must be resisted with determination.

Vatican capitulates to ultra-progressives in ‘highly symbolic’ reconciliation with dissident US sisters: critics

A God of Surprises: Pope’s confusing ‘progressive’ vs ‘traditionalist’ calculus