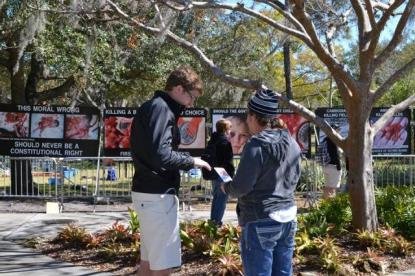 We talked for a while and finally I asked, “If we know the unborn are human at conception, would you agree that abortion is a human rights violation?” I was expecting a yes. I presented a good case, with little room to still support abortion.

“Well, what about…what if she’s…” He was staring at the ground, unable to find words. “Raped?” I asked hesitantly. He shifted his feet uncomfortably and replied with whisper, “yeah.” I discussed how we need to do more to support victims of rape and that we need to do more to convict the rapists. I ended with how, even in these tough situations, it is still a human with human rights.

A couple of hours later, he returned with what looked like a friend. He stood at a distance from the display, far enough that no one would come and talk to him, and he was pointing his friend to the pictures. The two of them stood there for quite a while, staring at the pictures. The next day, he was back with a different friend in the same spot, pointing to the pictures.

I never got a chance to talk to this hurting man again. But he was speaking to his friends and changing minds. These pictures changed him within minutes, and within hours he was bringing others to see. No matter how much pain one might see in the world, there will always be more. And some of this pain must exist so that good may eventually come out of it.