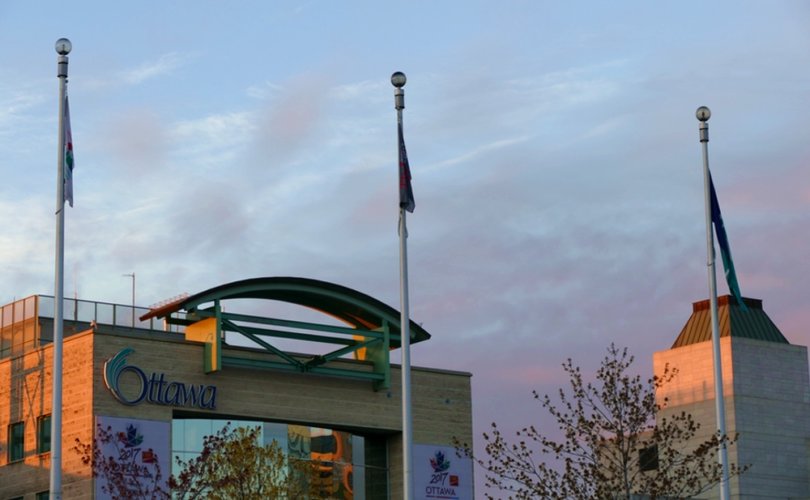 OTTAWA, October 6, 2017 (LifeSiteNews) — After angry backlash when a pro-life flag was raised for the first time at Ottawa’s city hall during the March for Life in May, Canada’s capital is changing its flag-raising policy.

The new protocol bans any raising of flags at city hall from organizations whose “undertakings or philosophy” are “politically or religiously motivated or represent other individual conviction.”

The consequence is that flags of any pro-life association from flying will be banished from a municipal flagpoles, says Johanne Brownrigg, Ottawa lobbyist with Campaign Life Coalition.

“This has been cleverly written to appear to be a serious and practical guidelines. It actually has the effect of writing us out,” she told LifeSiteNews.

The flag proclaiming “National March for Life Ottawa” was raised May 11 at the request of Francis Barrett.

The 89-year-old father, grandfather, and former police officer told LifeSiteNews at the time he worked with city staff to arrange the event.

But after LifeSiteNews posted a video of the dawn flag-raising on social media, a huge outcry arose, with Planned Parenthood and Abortion Rights Coalition of Canada summoning supporters to tweet their outrage.

Moreover, seven city counsellors also quickly issued a statement demanding the flag be taken down, writing that they were “outraged that a flag representing a personal conviction to restrict a woman’s right to safe and legal abortion is flying on the grounds of City Hall for the first time in the City’s history.”

Mayor Jim Watson hastily took to Twitter to reassure Ottawa citizens that he was pro-abortion, the flag would be removed, and he was ordering a review of flag-raising protocol.

Barrett, for his part, insisted he had received permission and that the city owed him an apology.

“We did everything legitimately, it was signed by the mayor,” he told LifeSiteNews at the time.

“This is really discrimination. … Could you imagine if they took the gay flag down? And they won’t let us fly that flag for one day, when they gave us permission?’

The flag was taken down, with the reason given that an individual had requested it, not a group.

It mandates organizations submit a flag-raising request on the letterhead of their association at least four weeks in advance of the event.

City hall won’t raise the flags of organizations or groups “whose undertakings and philosophy are contrary to City of Ottawa policies or bylaws, espouse hatred, violence or racism, or are politically or religiously motivated or represent other individual conviction.”

But it will fly flags of organizations whose “mandates, programs or activities reflect a connection to the City and to matters of municipal interest” or “correspond with relevant days of awareness, celebration, importance commemoration or promotion” that are “recognized by the Ontario Provincial Government and/or Canadian Federal Government, or a Ministry or Department thereof.”

As Brownrigg pointed out, because pro-life groups don’t have “provincial or federal acknowledgment to fall back on, we can expect that going through the motions will really be symbolic. “

Canada has the most pro-abortion laws in the world. But its capital city just raised a pro-life flag

Canada’s capital flew a pro-life flag. Liberals are furious, even after the mayor took it down