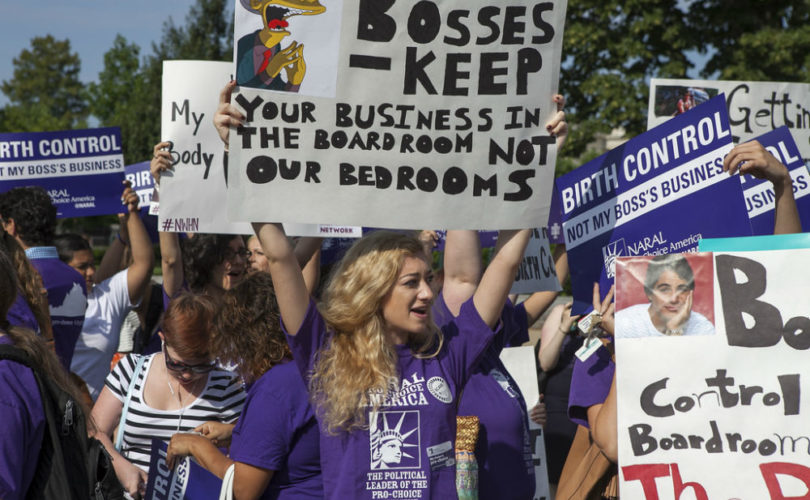 Protesters rally outside the U.S. Supreme Court while waiting for the court's decision in the Burwell v. Hobby Lobby case. American Life League

Archbishop William Lori of Baltimore and Cardinal Sean O’Malley, Archbishop of Boston, are asking the Catholic faithful and others to reach out to their senators in response to a piece of legislation known as “Protect Women’s Health From Corporate Interference Act of 2014” (S. 2578.) Lori is the chairman for the United State’s Conference of Catholic Bishops’ (USCCB) Committee for Religious Liberty, and O’Malley serves as chair for the USCCB’s Committee on Pro-Life Activities.

According to the letter on the USCCB website, the legislation is an attempt to reduce religious freedom, and puts health coverage above one of America’s most cherished freedoms. The bishops list several concerns:

In short, the bill does not befit a nation committed to religious liberty. Indeed, if it were to pass, it would call that commitment into question. Nor does it show a genuine commitment to expanded health coverage, as it would pressure many Americans of faith to stop providing or purchasing health coverage altogether.

Reps. Louise Slaughter (D-NY), Diana DeGette (D-CO), and Jerrold Nadler (D-NY) introduced the bill in the House of Representatives; Senators Patty Murray (D-WA) and Mark Udall (D-CO) sponsored companion legislation in the Senate. This legislation was drafted in response to the Supreme Court’s recent decision regarding Hobby Lobby and Conestoga Woods, which upheld employers’ right to not pay for health care measures that violated the employers’ religious beliefs. A press release from the representatives sponsoring the bill said,

This bill will ensure that employee access to critical health services is not at the mercy of their bosses’ religious beliefs. Congress never intended to allow corporate employers to block employee access to critical preventive services like birth control. We hope that our colleagues will join us in acting quickly to correct the Supreme Court’s decision in Burwell v. Hobby Lobby. Our bill simply protects employees’ rights to all federally mandated health services, including contraception. A woman’s private medical decisions should be between her, her doctor, and whomever else she wishes to consult – they should not be subject to approval by politicians, Supreme Court justices, or bosses.

The legislation overlooks the fact that the Supreme Court decision does not stop any woman in the United States from using artificial birth control, so-called “morning-after” pills or seeking abortions. The decision only states that employers whose religious beliefs find these types of medication or procedures to be morally reprehensible do not have to pay for them. Marcia Greenberger, co-president of the National Women’s Law Center remarked, “Bosses should stick to what they know best—the board room and the bottom line—and stay out of the bedroom and exam room.” Some bosses are trying to do just that: stay out of it, yet they are being told they must pay for every exam room situation. Pregnancy is not a disease, artificial birth control is inexpensive and easy to purchase, and employee health insurance cannot trump religious liberty. Americans’ freedom of religion is far too precious to be frittered away by legislation such as this.