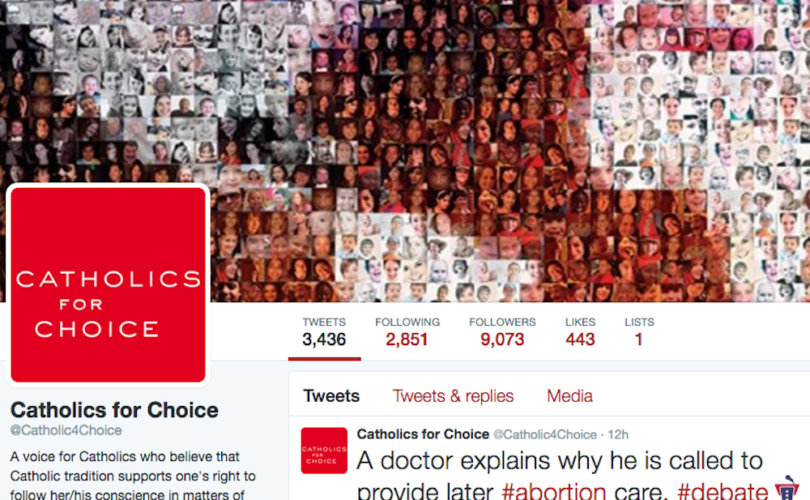 The tweet’s message met with criticism from Dr. Thomas Williams at Breitbart.com.

“In point of fact, the Catholic social justice tradition condemns abortion in the strongest terms as the brutal murder of an innocent human being,” Williams wrote.

Catholics for Choice had engaged in a number of Tweets using Planned Parenthood’s anniversary to distort Catholic teaching on abortion.

“Because of their faith, Catholics celebrate Planned Parenthood,” another tweet said, while a third contained the claim, “Catholicism taught me about compassion, and I embrace that tradition and Planned Parenthood.”

The abortion giant, still trying to fight its way out of being caught bartering for baby body parts from children aborted at its abortion facilities, reached the 100th anniversary of its founding last weekend, commemorating the first birth control “clinic” opened in 1916 by Planned Parenthood’s eugenicist founder Margaret Sanger.

Catholics for Choice is “a pro-abortion pressure group that works to legitimize abortion within the Catholic Church,” Williams said.

“Leaders among the U.S. Catholic hierarchy have denounced the faux-Catholic organization,” he continued, “saying that it does not represent Church teaching and has no right to co-opt the term “Catholic.”

The George Soros-funded pro-abort group has actively lobbied Congress to continue funding of Planned Parenthood in the wake of the abortion giant’s human remain trafficking scandal.

The latest round of denunciations of Catholics for Choice had generated from its deceptive “Abortion in Good Faith” newspaper ad claiming that taxpayer funding of abortion was consistent with the Catholic faith, garnering condemnation from New York Cardinal Timothy Dolan, the Archdiocese of San Antonio, Texas, and others.

“CFC is not affiliated with the Catholic Church in any way,” Cardinal Dolan stated in response to the group’s illusory ad. “It has no membership, and clearly does not speak for the faithful. It is funded by powerful private foundations to promote abortion as a method of population control.”

Catholics for Choice “rejects and distorts Catholic social teaching — and actually attacks its foundation,” the cardinal continued, and its “extreme ads promote abortion as if it were a social good.”