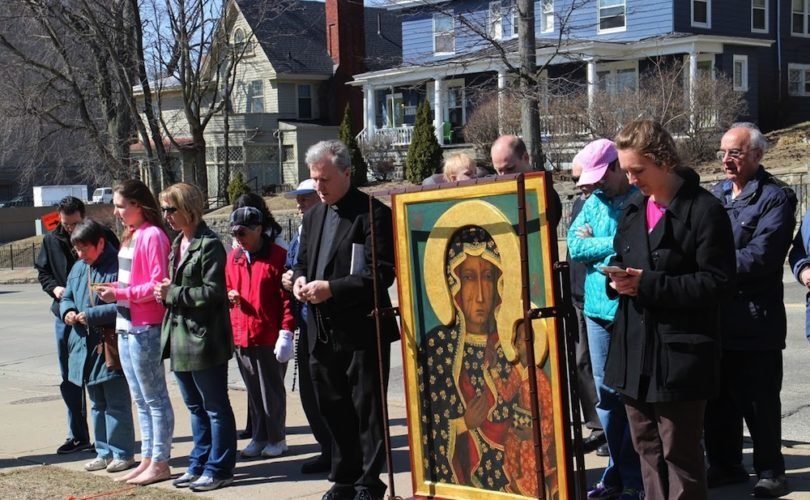 The beautiful port city of Corpus Christi in Texas will have a special celebration of its feast day this weekend. For the first time in 37 years there will be no facilities committing abortions in the city!

At one time in Corpus Christi there were three abortion mills in operation and nine abortionists in this city of over 300,000 people. But the last of these deadly offices, that of Eduardo Aquino, is now closed.

Catholic pro-lifers credit the Mother of God for this triumph of life over the culture of death, along with innumerable prayers over the years. Corpus Christi Bishop Emeritus Rene H. Gracida was particularly touched that the facility’s closure came on his birthday, June 9. Bishop Gracida, who was a national leader in the fight against abortion, came to pray with the icon of Our Lady of Czestochowa in front of the abortion center when she visited Corpus Christi earlier this year. It is also true that Christians of various denominations have been praying with Catholics for these clinics to shut down for decades – this is truly a team effort of prayer and trust in God’s grace.

Human Life International’s Father Peter West led a special prayer with the icon outside Aquino’s office during the hours in which abortions were committed there. There was a dramatic confrontation with Aquino and his staff and over forty mothers there for abortions. Two women turned away and did not go into the abortion center, but others screamed and raged against the pro-lifers.

This is not the first time that pro-lifers in Corpus Christi credit Our Lady with shutting a local abortion mill down. Over ten years ago the pilgrim image of Our Lady of Guadalupe was brought to Corpus Christi by pro-lifers and the faithful prayed with her outside another abortion business with a special intention that the place would close its doors forever. Exactly one year later they brought Our Lady of Guadalupe back and discovered that the office had been sold and no further abortions would take place there.

Dr. Francette Meaney, who has led pro-life efforts in Corpus Christi for almost four decades, rejoiced, saying, “We thank Mother Mary in her icon of Our Lady of Czestochowa for this blessing. Dr. Aquino performed 2,000 abortions a year here and now the city named for the Body of Christ will be a place where all children have a chance to have a birthday.”

In fact, with this closure there are no abortion centers south of San Antonio, meaning 300 miles of South Texas are abortion-free. This is part of a dramatic trend.

Since December 2010 the number of abortion businesses in Texas has dropped from 41 to 22. The Texas state government has passed a series of laws in recent years which have made a big impact on the availability of abortion. Women seeking abortion in Texas must now be given a sonogram and information about the development of their preborn child, as well as the full facts about the risks associated with abortion.

Offices that commit abortions must also now meet the same safety standards that normal ambulatory surgical centers are required to possess, and abortionists now need admitting privileges in a hospital with 30 miles of their abortion business.

But as we know, the fight to stop abortion does not end merely with shutting down offices – we must also help women who have unexpected pregnancies and don’t know where to turn.

There are several centers in Corpus Christi that help mothers with crisis pregnancies. Some pro-lifers there are hoping to buy the property where the last abortion facility in Corpus Christi was located and turn it into a pro-life memorial center that will also conduct pro-life counseling. Human Life International’s affilate in Austria did something similar a few years ago: opening a crisis pregnancy center with a chapel in a former abortion facility – one they helped to close in Vienna with prayers and sidewalk counseling.

Pro-lifers in Corpus Christi plan to place a large statue of Our Lady on the roof of the new center with prayers of reparation for the thousands of children who were killed there.

Please continue to pray through the intercession of Our Lady for the end of abortion around the world!