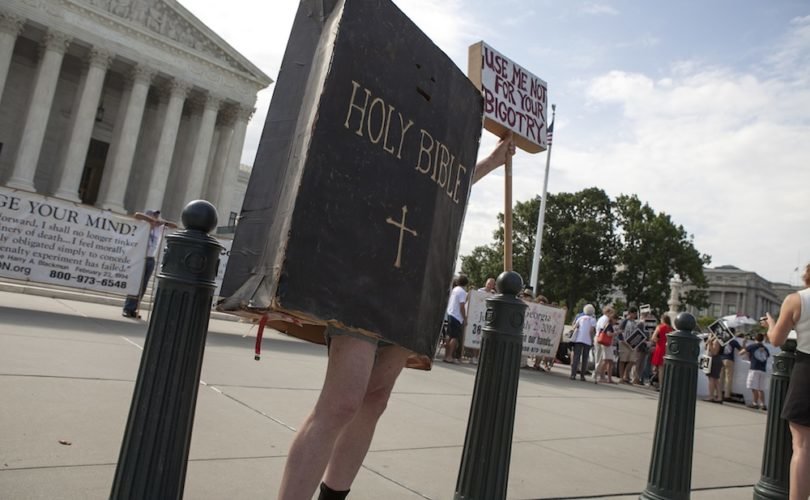 An abortion activist protests at the Supreme Court on June 30, 2014 as the justices released their ruling in the Hobby Lobby case.American Life League

“Once again an all-Catholic, all-male, all-ultra-conservative majority of five has voted en bloc to eviscerate fundamental rights,” said Annie Laurie Gaylor of the atheist Freedom From Religion Foundation. Yup. Catholics always conspire to do things “en bloc” (save for Sonia).

“Court's Catholic Justices Attack Women's Rights” is the headline of Margery Eagan's Boston Herald article (it's those Catholics again). The American Humanist Association issued a statement with a picture of a rosary next to birth control pills. Cute.

In the Huffington Post, Ryan Grim noted that “these men [the five judges who voted for religious liberty] are Christians.” He also said, “The Supreme Court ruled Monday that Christian business owners are special.” I guess the ruling does not apply to Mormons.

Also in the Huffington Post, Ronald A. Lindsay, a militant atheist, asks, “Is it appropriate to have six Catholic justices on the Supreme Court?” His hero is JFK, who famously threw his religion overboard to win votes. “Unfortunately,” he writes, “a majority of the Supreme Court may now be resurrecting concerns about the compatibility between being a Catholic and being a good citizen….” He's not resurrecting the old canard—the Justices are.

Philip F. Cardarella, writing in the Kansas City Star, says that when JFK ran, the question was, “How could someone who owed his religious obedience to the Pope in Rome and the doctrines of the Catholic Church truly be trusted?” Now, he opines, “Five men on the Supreme Court—all Catholics—may well just have proven him [JFK] wrong.” Got it.