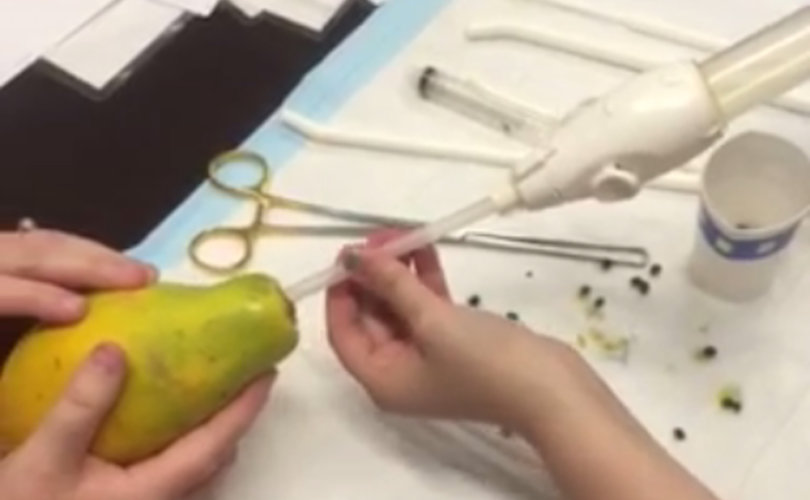 CHICAGO, October 7, 2016 (LifeSiteNews) – They…what?? Students at Loyola University Chicago, a Catholic university, decided to demonstrate the most common abortion technique on a papaya.

The Students for Reproductive Justice (SRJ) even posted a video of the odd procedure — which involved the use of real medical tools and drew uneasy laughs among those attending — on Facebook.

The “abortion” on the mature, yellowish-green tropical fruit was led by a female Loyola medical student, according to the SRJ.

“The purpose of the papaya workshop is for students to learn about aspiration abortions, and to destigmatize abortion in general,” the group said on its Facebook page.

“Abortion is a simple medical procedure. Up to 10 weeks, this procedure is very similar to sucking the seeds out of a papaya! We'll have another workshop like this next semester, so stay tuned for that!”

If the protesters really wanted to teach students about aspiration abortion, they could show them this video.

The same university was recently the subject of a ruling from the National Labor Relations Board (NLRB) that undermined its Catholic identity. But if this university has a “Students for Reproductive Justice” chapter, does it really need government help? The same university has been home to drag shows, and its students were years ahead of the “gender-neutral” restroom phenomenon.

And now it has been home to an incredibly valuable abortion demonstration. The stunt proves that ideological supporters of abortion believe, if “justice” prevailed, the unborn human person would receive no greater significance than a Hawaiian fruit.

This, and other, Catholic and religious universities may wish to hold campus-wide teachings on the value of life before more of their students embrace the notion that murdering a child is no different than making fruit salad.

NLRB rules faculty at yet another Catholic college have no role in religious mission
Chicago’s Jesuit-run Loyola U. drag show asks: ‘what does your gender mean to you?’