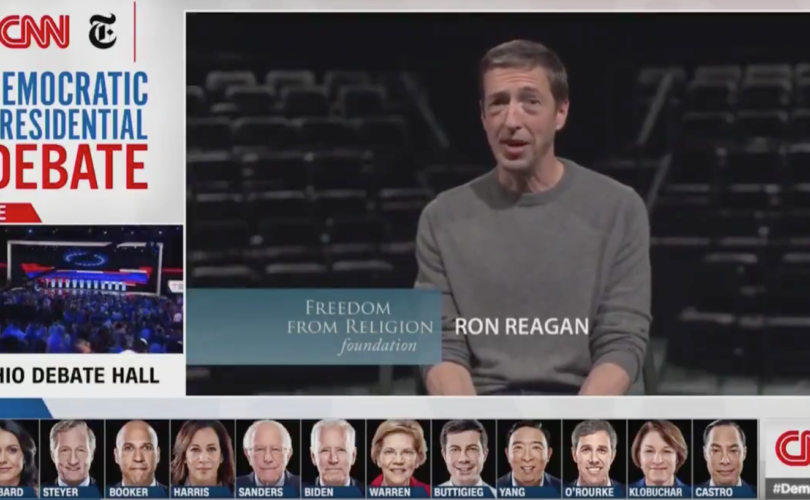 October 16, 2019 (LifeSiteNews) — In a commercial shown during last night’s CNN Democrat Presidential debate, Ron Reagan, son of President Ronald Reagan, declared that as “an unabashed atheist,” and is “not afraid of burning in hell,” clearly mocking those who do believe in both heaven and hell.

The 30-second ad seeking donations for the atheist group, Freedom From Religion Foundation, was shown during the commercial break between the first and second half of the Democrat debate.

“Can you think of any ad more suitable for showing at a Democratic Party event than one from an atheist-linked organization?” asked The Washington Times’ Cheryl Chumley.

Here’s what the son of the late great President Ronald Reagan said:

Hi, I'm Ron Reagan, an unabashed atheist, and I'm alarmed by the intrusion of religion into our secular government. That's why I'm asking you to support the Freedom From Religion Foundation, the nation's largest and most effective association of atheists and agnostics, working to keep state and church separate, just like our Founding Fathers intended. Please support the Freedom From Religion Foundation. Ron Reagan, lifelong atheist, not afraid of burning in hell.

The Twitterverse was quick to respond:

“This is the left. They booed God at their convention. They want to defund churches that don't support their progressive views,” pointed out Charlie Kirk, founder of Turning Point USA.

“And this is the ad that gets the prime spot at their debates — ‘I'm not afraid of burning in hell.’ RT if you're disgusted with this Godless part,” he added.

This is the left

They booed God at their convention

They want to defund churches that don't support their progressive views

RT if you're disgusted with this Godless party pic.twitter.com/ycyprA0JVv

“Ron Reagan, an unabashed atheist … his Dad is rolling over in his grave,” tweeted Allyssa Prince.

Ron Reagan, an unabashed atheist… his Dad is rolling over in his grave. https://t.co/9YUGoHCLL3

“Mocking God by mocking the existence of hell is not exactly the key to a good Christian’s heart,” continued Chumley in her commentary. “Neither is revising and rewriting U.S. history to make it seem as if the founding fathers were completely devoid of religion, faith and belief in a higher power — and that they wanted the rest of us, including the government of, by and for the people, to be that way, too.”

To the chagrin of the liberal presidential hopefuls, Ron Reagan “crashed the Democratic presidential primary debate” by becoming the top trending search on Google during the CNN televised event, according to the NYTimesPost.

“CBS, NBC, ABC and Discovery Science networks have refused the (Ron Reagan) ad since 2014, but it has previously run periodically on CNN, Comedy Central and Rachel Maddow’s show on MSNBC,” reported the Freedom From Religion Foundation.

CNN will continue to run the ad today during The Lead with Jake Tapper, The Situation Room with Wolf Blitzer and Anderson Cooper 360.