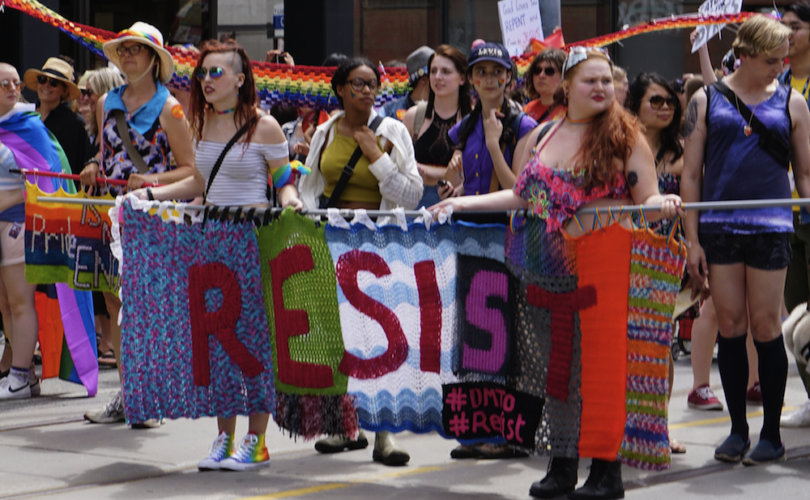 Southern’s video, posted August 7, includes explicit and disturbing clips of some of the worst excesses of “Pride” parades: lewd dancing, simulated homosexual acts, a “twerking” eight-year-old, and the shocking clip of the little girl watching a man in underwear dancing while off-camera voices laugh and mock, “Oh, where is mom and dad?”

“For the most part I’m pretty libertarian,” says the 22-year-old Southern, who originally hails from Surrey, British Columbia. “But if you ever want to spur some homophobia in reasonable people, just take them to a Pride Parade. Because, hell, even my LGBTLMNOP friends go bigoted on Pride.”

“You show up and see men in gimp costumes humping the air and flinging their d—- around children while transvestites covered in AIDS blood are prancing around in crop tops that should be illegal for their body type,” says Southern.

“And all the while these people are saying they are representative of the best of the LGBT community. I mean that’s what a pride march is supposed to be, right?”

Southern says she concluded two things from witnessing a Pride Parade: “Grandpa was right,” and “liberals want people to hate the gays.”

On the first point: “We spent forever, forever laughing at old conservatives who would go on rants about the slippery slope of legislating homosexual marriage, and now we’re here in the current year with state-enforced pronouns and 52-year-old dads abandoning their family and children to become six-year-old girls,” Southern says.

“I mean, the slippery slope is appearing to be very freaking real right now despite everyone saying it was an exaggeration,” she adds.

“You have kids cutting their genitals off, you have men identifying as children, you have people pretending to be pets and demanding you identify them that way, you have laws being passed forcing you to use their ze, zer zare unicorn pronouns.”

“And even when the liberal press said, oh no, things like bill C-16, that pronoun law, it’s not legally binding, that’s just right-wing propaganda, as soon as it passed, you had lawyers coming out and saying you have to use my pronouns because it’s the law.”

On the second point: “The liberal elite and the people running this things really hate normal gays.”

“You guys may just turn all of society against the LGBT community in a generation.”

Southern, who left The Rebel in March, has 305,000 Twitter followers, is the author of a bestselling book, “Barbarians: How The Baby Boomers, Immigration and Islam Screwed My Generation,” has appeared on several prominent TV talk shows, including the Rubin Report, hosted by openly homosexual Dave Rubin, and is endorsed by Ann Coulter.