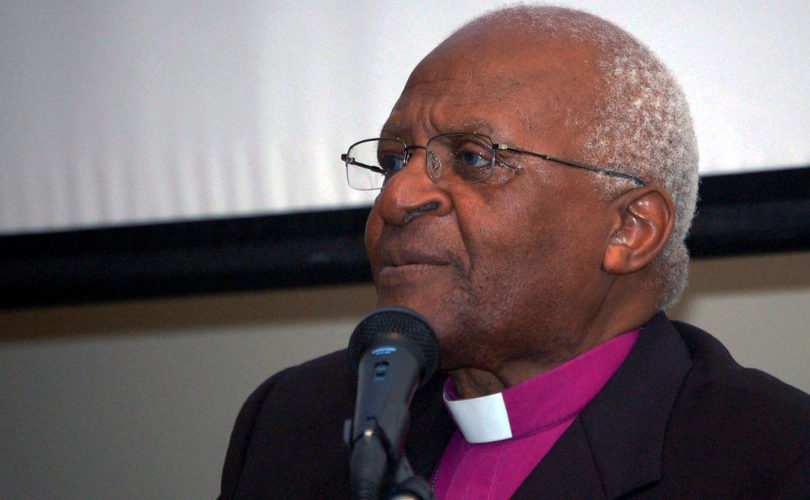 It is perhaps in the nature of celebrities to champion causes they perceive to be popular. Celebrity bishops are no exception and Desmond Tutu’s support for Lord Falconer’s Assisted Dying Bill is not surprising but deeply disappointing.

Dignity in Dying, the former Voluntary Euthanasia Society, has assembled over 50 actors, sportsmen, entertainers, authors and other celebrities to add weight to their campaign – similar  people to those advertisers draft in to provide endorsement for consumer products.

The implication is that we should follow these celebrities and embrace their preferences.

And there is no doubt that so-called ‘assisted dying’ resonates strongly with the spirit of the age and its commitment to the beliefs that personal autonomy should trump all other considerations, that it is better to be dead than to suffer and that there are no moral absolutes.

These celebrities also fit the description of those who make most use of the law in the US state of Oregon – white, healthy, wealthy, college educated people who are used to being in control in life and want similarly to be in control in death.

Desmond Tutu has always been popular amongst the metropolitan liberal elite who disproportionately occupy the corridors of influence and power in Britain – parliament, the institutions, universities and the worlds of the arts, entertainment and media, and particularly the BBC.

His endorsement of the assisted dying cause will further strengthen their personal conviction that they are right.

However there are elements of Tutu’s argument that I find deeply disturbing, which I believe are deeply damaging to social attitudes towards the vulnerable and which greatly endanger our future cultural trajectory.

I would recommend that people read beyond the headlines of ‘Tutu embraces assisted dying’ and read his argument in full.

It’s clear first of all that Tutu has been profoundly influenced by the death of Nelson Mandela and the way his life was artificially prolonged nearing the end.

There are few people who would not sympathise with Tutu here. Life has a natural end. All of us are mortal. There is, as the good book says, a time to die. Intrusive ‘treatments’ at the end of life where the burden imposed on a dying person clearly outweigh any benefit should be avoided. Sometimes the treatment can be worse than the disease. We should not be ‘vitalists’, artificially prolonging life indefinitely just because we have the technology to do so.

There comes a time when we must recognise that death is imminent, inevitable and that we are powerless to stop it, and that our priority must be to make the dying process as comfortable and bearable as possible. Part of that process will involve the withholding or withdrawal of inappropriately meddlesome therapeutic interventions. That is all part of good palliative care; it is in short good medicine.

But Tutu is arguing for far more than easing natural death. He wants to make it legal for doctors to kill people by prescribing legal drugs – and that goes against both the Hippocratic Oath which has for 2,500 years governed the practice of medicine, and also thousands of years of the Judeo-Christian ethic as embodied in the sixth commandment  ‘Thou shalt not kill’.

What disturbs me most about Tutu’s argument are two key arguments that he uses to support his case.

First, Tutu argues that there is a duty for older people to die in order to make way for the young.

‘Dying is part of life. We have to die. The Earth cannot sustain us and the millions of people that came before us. We have to make way for those who are yet to be born…. But why is a life that is ending being prolonged? Why is money being spent in this way? It could be better spent on a mother giving birth to a baby, or an organ transplant needed by a young person. Money should be spent on those that are at the beginning or in full flow of their life.’

Such comments play into the hands of the likes of population controllers like Jonathon Porritt, chairman of the UK Government’s Sustainable Development Commission, who in the tradition of Malthus and Ehrlich, warn of ecological and environmental disaster ahead unless we do something rapidly to curb population growth.

Up until now they have mainly argued that the best way of curbing population growth: contraception and abortion must be at the heart of efforts to combat global warming and couples who have more than two children are irresponsible.

But it is a subtle extension of this same argument to say that the dependent elderly should make way for the younger generation by bringing forward their deaths. The right to die can so easily become the duty to die and the generation that has killed its children through abortion could very easily become that which is killed by its children through euthanasia and assisted suicide. Add in economic crisis, debt, cuts in health and welfare and the argument gains force by playing on popular prejudice against those perceived to be a drain on families and the state.

In the US state of Washington, where has enacted a law like Falconer’s, over six in ten of those making use of it do so because they believe they are a ‘burden’ on family, friends and caregivers. The law has removed the protection that vulnerable people currently have against the subtle coercion of relatives shouldering the care burden and anxiously eyeing a dwindling inheritance.

But the reality is that the overwhelming majority of elderly people want quite reasonably to live for as long as they can in the best state of health that they can. And the mark of a civilised society is that it makes sacrifices for the weak, rather than sacrificing the weak. ‘Bearing one another’s burdens’ is what St Paul said is at the very heart of the teaching of Jesus Christ; it is what true love really is (Galatians 6:2).

Second, Tutu argues that lives which depend on heavy medical intervention or technological support are not worth living.

‘I think when you need machines to help you breathe, then you have to ask questions about the quality of life being experienced and about the way money is being spent. This may be hard for some people to consider.’

I have two close friends who suffer from sleep apnoea so severe that they require CPAP (continuous positive airway pressure) machines to help them breathe at night. They each have a serious disability, and yet with the help of this medical technology are able to maintain ministries as international conference speakers.

I think of my many friends from the disabled community for whom technology – motorised wheelchairs, hoists, ventilators, dialysis machines, catheters and a bewildering array of drugs – make the difference between a life of utter dependency and one where they are enabled to function at an unbelievably high level. This is made possible by ongoing research and development, considerable financial investment and a willing supply of helpers and assistants.

There is a myth dangerously gaining traction today that medicine and technology have made our lives worse – that people are being kept alive by machines and that this is resulting in prolonged misery. The reality is the opposite. Because of medical and technological advances people are living longer than ever before and enjoying a better quality of life than ever before. And the overwhelming majority of people with terminal and chronic illnesses or disabilities do not want assisted dying but assisted living – help and support to live as long and as well as they can.

People who are dying and disabled value their lives in a very different way than those who are able bodied and have a remarkable ability to adapt.

This is why disabled people will be rallying in force outside parliament next Friday when Falconer’s bill is debated. They don’t want people like Tutu and others making judgements about whether or not their lives are worth living and suggesting that they are using up valuable resources that should instead be consumed by the young, vigorous and fit. We need to listen to them.

At the heart of the Christian story is Jesus Christ, the creator of the universe, who took the form of a servant to seek and save the lost. He brought compassion and healing to the elderly, dying and disabled and gave himself for us walking in the shadow of the cross and bringing the hope of life beyond death.

This is where Christians should be today – not campaigning like Tutu for lethal draughts of barbiturate to be made available for vulnerable people whose lives are judged not worth living in order to ease the burden of others who might have to care for them – but getting mobilised to provide time, money and manpower to make the lives of those who are dying and disabled as good as they possibly be until natural death intervenes in good time.

Desmond Tutu’s arguments in support of assisted dying will simply fuel existing prejudice against those who are elderly, dying and disabled. They should be seen for what they are and given the short shrift they deserve.

Reprinted with permission from Mercatornet.com.