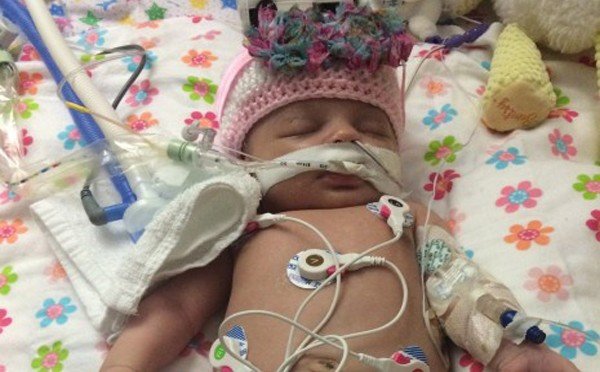 (Live Action News) – Ellis Rodriguez was already a miracle baby, born after her father Joel had died from cancer at age 35. He had predicted to his wife Sarah right before his death that they would have a daughter to join their two-year-old son Milo – and he was right. But at just two weeks old, Ellis contracted bacterial meningitis, and after two weeks in the hospital, the doctors told her mother Sarah that her daughter was now incompatible with life.

Ellis was on a ventilator and Sarah felt completely alone. As she told The Blaze, she was holding out for a miracle, but what the doctors were telling her was extremely discouraging. She said:

“They said there was profound damage to Ellis’ brain. I took that whole rest of the day and I said, ‘All right, I’m going to say goodbye.’”

Sarah cut locks of Ellis’ hair and painted her hands and made handprints and footprints. She wanted to have anything she could to remember her baby girl by. After the doctors removed the ventilator, Sarah was able to rock her daughter and read to her. She waited for her daughter to die, but Ellis defied the doctors and began to breathe on her own.

“For the first hour I was rocking her, I read her a story because I had never gotten the opportunity to give her a story,” Sarah told The Blaze. “I’m giving her permission to leave. I was telling her, ‘You get to meet your daddy today’ – to make transition as peaceful as it could be.”

Yet Ellis continued to breathe. Doctors told Sarah that Ellis would likely be a “vegetable” and would never be normal.

But she’s had follow-up appointments since being removed from the ventilator and the doctors can find no signs of brain damage. One doctor even told Sarah that Ellis is “absolutely laughing in the face of medicine.”

While Sarah still struggles with life after her husband’s death, she tries to keep him a part of their lives. Ellis, whose name means “Jehovah is God,” is growing and developing right on track for her age. She’s proving that even doctors can be wrong and that miracles are possible.

You can read more about Sarah, Milo and Ellis on Sarah’s personal blog.