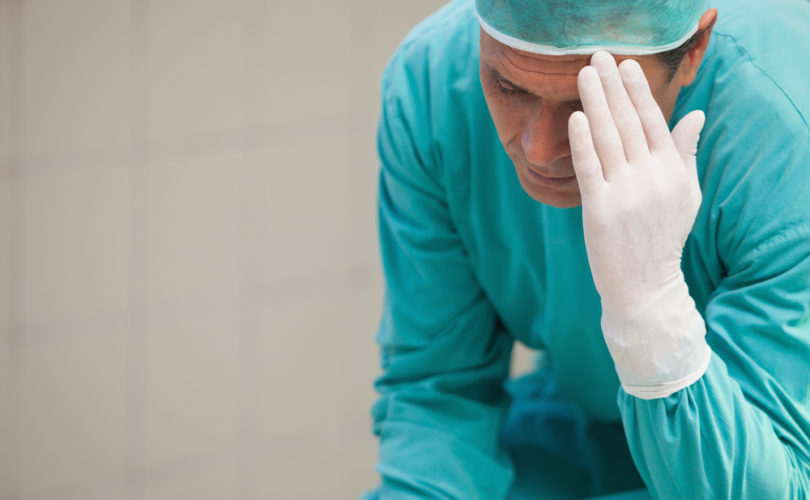 July 29, 2015 (LiveActionNews) — How does a person who pledges to “first, do no harm” justify actively taking a person’s life on a regular basis? How can a doctor switch back and forth between healer and executioner?

The July issue of the Journal of Obstetrics and Gynecology explored how this affects residents, as they grappled with the moral implications of performing abortions. Four residents were profiled, and each of them struggled with a variety of questions. When does life begin? How can I justify harming a preborn child? What would God, my parents, or my friends think? Here, we see that even residents who choose to continue performing abortions are not truly comfortable and at peace with that decision.

Increasingly, I have found myself caught up in an endless array of rhetorical questions. Is there not a more profound difference between 10 and 20 weeks than between 20 and 30? If my first task as a physician is to do no harm, how can I justify harming a fetus? I do not pretend to know the answers to these questions, but given what I perceived to be an abyss of ambiguity, I chose not to provide elective terminations.

After my first morning of early abortions, we performed an 18-week termination. Seeing the fetus on an ultrasound scan and then watching it as we did the procedure really shook me to the core. I thought maybe I had made the wrong choice, and I could not stop thinking about what my family would think if they knew what I had done.

Later that week we had an informal gathering of residents who had struggled with abortion training. It became apparent that others shared similar feelings. Many of us felt more comfortable with early abortions and struggled with second-trimester cases.

Regardless of whether we performed abortions or not, it had to do with patient care and, in this case, our patients are the mothers. After listening to the struggles of fellow residents, I convinced myself to return to the clinic.

Abortion is a necessary procedure that I feel morally obligated to make available to my patients. The future of this service hinges on our society’s ability to support its practice, prevent undesired pregnancy, and ensure the safety of abortion providers. I have worked through my own internal struggles, but these broader societal issues will shape how I practice in the future.

I love obstetrics and gynecology — the breadth and depth, the bonds between patients and providers, and the lifelong relationships that are formed. However, I once heard someone say that an ob-gyn who did not provide terminations was not offering their patients the best, most complete care. Initially I shrugged this off as her opinion and deemed it irrelevant to me and to what my practice would become. But as I replayed that statement in my mind, I began to wonder, would I be providing the best care to my patients if offering terminations conflicted with my personal beliefs and passions? Would my patients feel judged and unsupported if I told them that I could not provide a service that they needed? Could I be truly impartial in my counseling?

It takes a certain level of cognitive dissonance to be both a doctor and an abortionist. And while decades ago it may not have been as much of an issue, our scientific knowledge has advanced; it has undoubtedly become harder and harder for doctors to quiet their doubts. With the advent of ultrasound technology, the humanity of the preborn has become unmistakable. We understand embryology and fetal development better now than ever before, so despite the abortion industry’s shoddy science, we know that a preborn baby’s heart is beating just three short weeks after conception, and that brain waves can be measured not long after. We know that at the moment of conception, the baby has a completely separate DNA strand. Never before has it been so difficult to ignore the reality that the baby being ripped apart in an abortion is, in actuality, a living human being, completely separate from his mother.

It’s no surprise, then, that residents— doctors in training — struggle with the decision to perform abortions. Even established abortionists aren’t able to put a good spin on it, with notorious late-term abortionist Susan Robinson saying that other doctors see abortionists as “the lowest of the low”, and Warren Hern saying that abortionists, instead of being respected, are made to feel irrelevant. Combine the lack of respect and prestige with ever-increasing science backing pro-life principles, it’s not surprising that fewer and fewer medical students are learning how to perform abortions. The ones that do learn are reportedly shunned.

It’s hard to take an oath to do no harm and yet, do immense amounts of harm every single day. And no matter how much the abortion lobby tries to paint a pretty picture, the reality is much more grim—so much so, that even doctors who perform abortions and say they’re proud to do so can’t quite make their doubts go away.