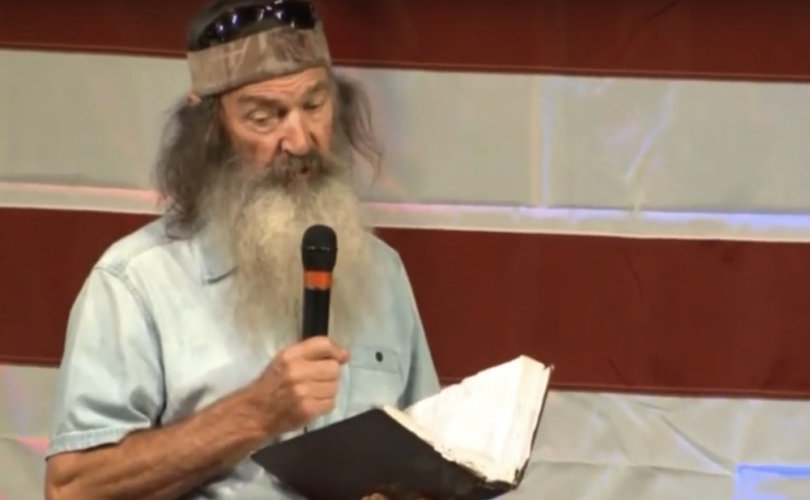 September 28, 2017 (LifeSiteNews) – Campaigning for Alabama Senate Candidate Judge Roy Moore this week, Duck Dynasty patriarch Phil Robertson warned that the U.S. will collapse if it continues to slaughter its offspring.

At the Monday night rally, Robertson recited a portion of chapter one of St. Paul’s letter to the Romans. “Since they did not think it worthwhile to retain the knowledge of God, he gave them over to a depraved man to do what ought not to be done. They became filled with every kind of wickedness, evil, greed, and depravity.”

“Sounds like America, doesn’t it? I’m quoting what the apostle Paul said 2,000 years ago,” Robertson told the crowd. “When you look on our streets in America, you see people running around with signs on top of their head, all puffed up … won’t even acknowledge the flag of the United States of America – the national anthem! You say what in the world’s going on? They’re senseless! Faithless!”

“Remember, as soon as you get God out of your psyche, he’s giving you a list after list … of what people do,” expounding on Paul’s letter. “They not only do these things, but they approve of those who practice them.”

“When a nation slaughters its offspring – one million a year – they always collapse those nations do – you can’t do that!” Robertson added.

Robertson has earned a reputation for speaking the unvarnished truth in an age when political correctness otherwise silences many.

In 2013, after the publication of his interview in GQ Magazine, Robertson was chastised by the pro-gay organization, GLAAD, for making “the vilest and most extreme statements uttered against LGBT people in a mainstream publication.”

Robertson had pointed out the superiority of conjugal sex over gay sexual acts, concluding, “I mean, come on, dudes! You know what I’m saying? But hey, sin: It’s not logical, my man. It’s just not logical.”

During a campaign rally, Robertson pointed out that God, not government, is in charge.