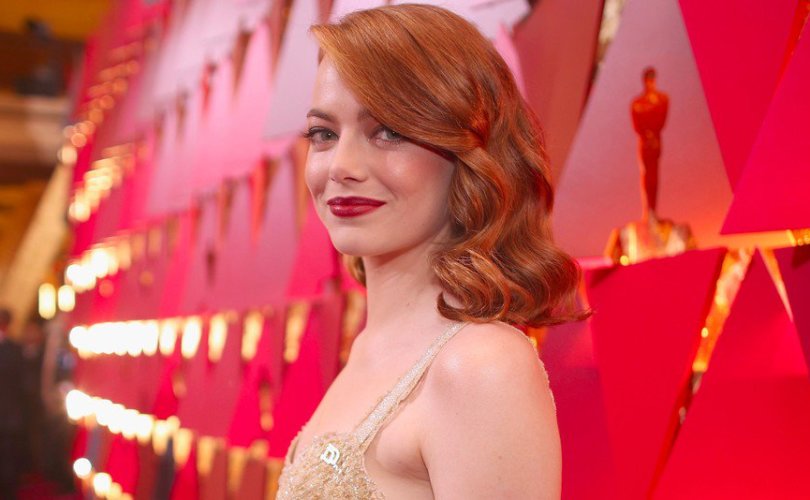 Emma Stone at the 2017 Oscarswww.twitter.com/GaryDaugherty

Stone's pin was on her dress; Johnson's was on her clutch. Stone won “Best Actress” for her role in “La La Land.”

Dakota Johnson is showing her support for Planned Parenthood at the #Oscars! #IStandWithPP pic.twitter.com/09VwiNNPxI

Planned Parenthood is the nation's largest abortion business. It aborts over 300,000 babies annually. The majority of its facilities do not offer prenatal care. It has been embroiled in scandal after scandal, from selling aborted baby body parts to aiding and abetting sex traffickers.

Tarell Alvin McCraney of “Moonlight” wore a pro-gay GLAAD pin. A handful of other celebrities wore American Civil Liberties Union (ACLU) ribbons. The ACLU is pro-abortion and supportive of the LGBT agenda.

The @ACLU was one of the biggest fashion icons at the #Oscars pic.twitter.com/KJTa0CYBda

Does it matter that a bunch of celebrities touted abortion and leftist causes? Nope, not really.

I'm getting the sense that something happened at The Oscars last night. Do I care? Not. at. all.
Watching the snow melt is more interesting

Not attending or watching the Oscars tonight, but I might give an angry political speech to my cat.

DC: Who's more self-important and bad at their jobs than us? LA: Hold my beer. #oscars