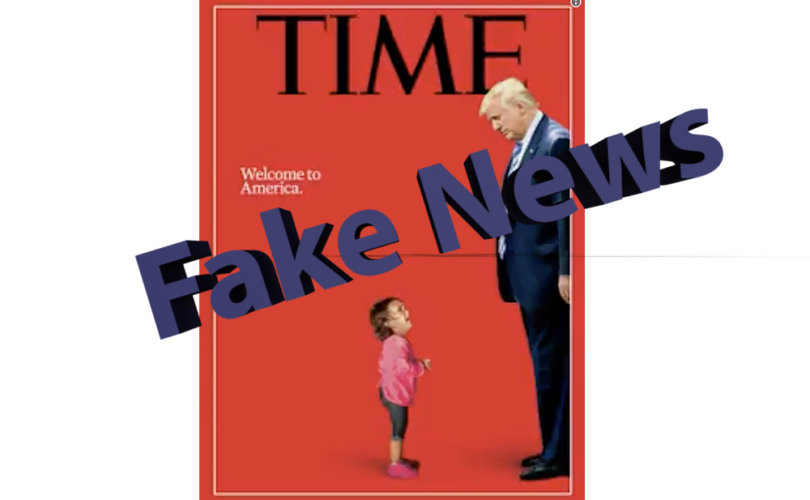 June 22, 2018 (LifeSiteNews) – There have been numerous stories published today deriding the Fake News being widely spread about the U.S. immigration policy separating children from their parents. The most-widely used photograph, described by Time and the Getty photograper who took the photo as supposedly illustrating this travesty turns out to have actually NOT been a photograph of a child that was separated from his mother.

The father of the tearful two-year-old Honduran migrant girl who became the face of the “family separation” news coverage says that his young daughter was never actually separated from her mother when caught by U.S. Border Patrol.

Instead, he says, his daughter and her mother are together in U.S. custody at “at a family residential center in Texas.”

Moreover, the mother had been deported from the U.S. in 2013, according to a statement given by Immigration and Customs Enforcement (ICE) to Buzzfeed on Thursday evening.

Denis Javier Varela Hernandez, 32, told the UK Daily Mail that his wife Sandra, 32, had taken their daughter, Yanela Denise, on a dangerous journey to the U.S. on June 3 without telling him.

As CBS reports this morning, the little girl was crying because her mother got caught at eleven o’clock at night crossing illegally into the US, and — shocker of shockers — was “tired and thirsty.”

Varela Hernandez told the Daily Mail that his wife paid a coyote — a human trafficker — around $6,000 to smuggle them into the US. This is precisely the kind of trafficking that leaves people not just tired and thirsty, but often dead or enslaved. It’s one very good reason why we need tougher border enforcement, and trafficking is the original reason why Congress passed a law mandating that children be kept separate from adults being prosecuted for illegal border crossings.

And there is so much more. Watch an especially revealing Facbook video dialogue by Canadian commenter Brian Lilley on the subject.

Another Fox report presents more information  alternative to that from the Fake mainstream media and Hollywood stars massive on-going campaign on this issue that they think will finally take down this president. Among other things the report notes,

Last month, liberals and journalists rushed to share an article featuring pictures of children locked in cages at an Arizona detention center. Many such tweets were quickly deleted or clarified when other users pointed out that the article was from 2014 — during then-President Barack Obama’s administration.

Others shared a tweet about a “prison bus” that Immigration and Customs officials allegedly used to carry babies. But the bus was used for educational field trips, and the picture was published on April 2016 — about six months before Trump won the presidency.