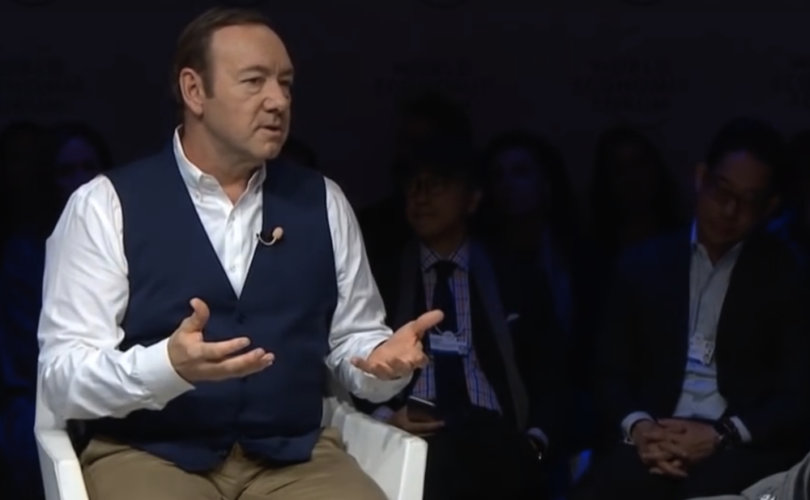 Spacey’s scenes for the about-to-be-released All the Money in the World, scheduled to open three days before Christmas, have been deleted and will be re-shot. Actor Christopher Plummer has been tapped to replace Spacey. The disgraced actor’s name has already been replaced on the movie’s IMDB entry.

The thriller, directed by Ridley Scott and produced by Sony Pictures, is based on the true story on the kidnapping of J. Paul Getty’s grandson in 1973.

Hollywood trade publication Deadline called the move  “unprecedented” and “shocking,” and reported that cast and crew of the film “in a unified front … agreed to re-shoot all of Spacey’s scenes.”

Not much more than a week ago, actor Anthony Rapp spoke out about how in 1986 then 26-year-old Spacey had attempted to sexually assault him. Rapp was just 14 at the time.

Since then, there has been a cascade of accusations, mostly from actors — many far younger than Spacey — who have said Spacey used his stature as respected actor to sexually harass them.

Netflix has jettisoned Spacey from the TV hit House of Cards and has had other upcoming jobs cancelled.

Spacey has been accused by Richard Dreyfuss’ son, Harry, of attempting to grope him when he was an 18-year-old high school student. The younger Dreyfuss penned an article for Buzzfeed, alleging that Spacey had the audacity to do this while his father, Richard, was present in the same room. “He knew he could fondle me in a room with my father and that I wouldn’t say a word. He knew I wouldn’t have had the guts. And I didn’t.”

In other news that demonstrates how quickly the actor has plummeted from Hollywood star to Hollywood pariah, the International TV Academy announced that it has dropped Spacey as the planned recipient of a special Emmy Award given to those “whose creative accomplishments have contributed in some way to the quality of global television production.”

Just this morning, former Boston TV news anchor Heather Unruh appeared on NBC’s The Today Show to tell the story of how Spacey in July 2016 grabbed her then 18-year-old son’s genitals.

Unruh said, “It’s more than a sex addiction, he’s a predator. We want Kevin Spacey to be stopped, especially my son. He doesn’t want another young man to be injured.”

Others who have come forward to speak about being sexually harassed by Spacey are director Tony Montana and Sweet Home Alabama star Josh Lucas.