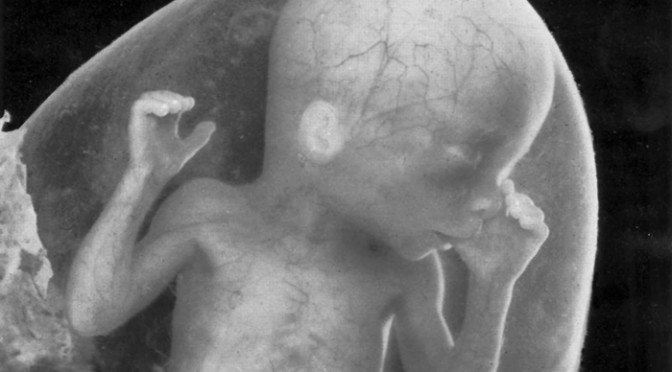 What’s even sadder about the situation is that the audience laughed when hearing this story. They weren’t embarrassed or horrified or uncomfortable.

Several of the tapes focus on the disposal of the bodies of preborn babies. In a discussion of Michigan’s abortion laws, it is revealed that abortion facilities in the Detroit area have been putting the bodies of aborted children through garbage disposals and then into the Detroit sewer system. Then, abortion facility representatives tried visiting funeral homes — and their attitudes were so callous and disgusting, they were asked to leave…

When the bill got pa– well, actually, getting ready for this, I started visiting funeral homes, who ultimately started talking about how much a body weighs, before they could figure out how much it was gonna cost, and then we had to go from pounds to ounces, and they were like, “We don’t even know how to charge for this.” And they showed me a body bag, and I was like, “Dude, we need to go to like, a Tupperware container.” [audience laughter] In which case, we started talking about the freezer jars we use, which really freaked them out, because all the fetal tissue was mixed together, after we do a POC check, and they were, they just wanted me to leave. And when a funeral home wants you to leave, it says a lot about the population you’re handling. You really [inaudible].

The difference between the funeral homes and these butchers is that people who work at funeral homes actually respect the dead. They understand that a dead body is not to be treated as garbage to be thrown out or something to be casually gotten rid of. Joking about an aborted baby’s dead body, and about how it can go in Tupperware containers or a freezer jar, in a place when the dead are treated with respect and reverence, was obviously not going to go over well. And it didn’t. What’s even sadder about the situation is that the audience laughed when hearing this story. They weren’t embarrassed or horrified or uncomfortable. To them, knowing that funeral homes won’t do business with them because they are that heartless and disrespectful isn’t something to be ashamed of. It’s funny.

Notorious late-term abortionist Susan Robinson has said that abortionists are looked down upon by the rest of the medical establishment; abortionists are seen as “the lowest of the low,” she says. And yet, when abortionists behave like this, and treat the bodies of the babies they kill so cavalierly, what else is really to be expected?