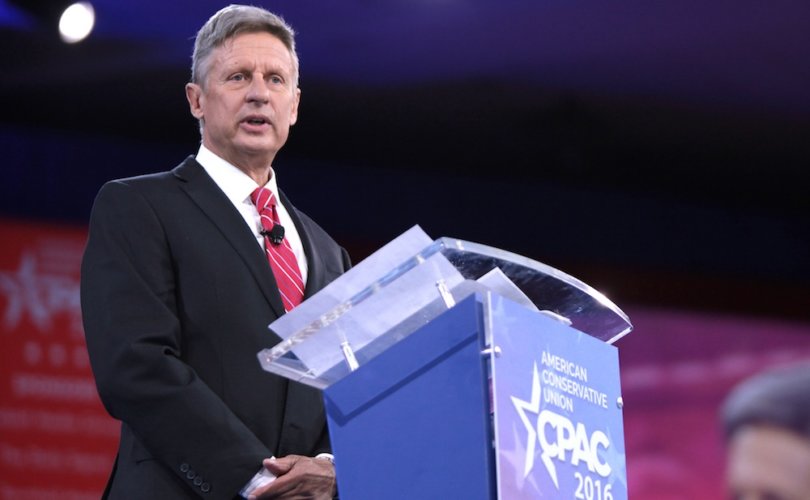 August 1, 2016 (LiveActionNews) — Libertarian presidential nominee and former New Mexico Gov. Gary Johnson rails against the “steady erosion” of “personal freedom in this country,” “a nation that was literally founded on the notion of liberty.” But as Live Action’s Adam Peters details, he doesn’t particularly seem to care that babies’ liberty has eroded to the point where they can be legally killed for any reason before even leaving the womb.

CARNEY: Do you think the Constitution guarantees the right to abortion?

So much for the idea that his pro-choice beliefs wouldn’t get in the way of him benefiting the pro-life cause through a commitment to federalism and judicial appointments who follow the Constitution. In 2012, Johnson at least believed “Any court decision that does not follow this original meaning of the Constitution should be revisited,” accordingly condemning Roe v. Wade for “expand[ing] the reach of the Federal government into areas of society never envisioned in the Constitution.”

Under 2012 Johnson, “laws regarding abortion would be decided by the individual states,” but 2016 Johnson has apparently decided that unconstitutional judicial precedent shouldn’t be challenged, and that states can’t set their own laws about most abortions.

Johnson had the following to say about laws that protect people from being forced to participate in things that violate their conscience:

CARNEY: Can the current federal RFRA [Religious Freedom Restoration Act] be applied to protect things like the wedding photographer and the Little Sisters of the Poor?

JOHNSON: The problem is I don’t think you can cut out a little chunk there. I think what you’re going to end up doing is open up a plethora of discrimination that you never believed could exist. And it’ll start with Muslims.

The Federalist’s David Harsanyi boiled down why this answer was nonsense:

But religious freedom laws are narrowly focused, and they don’t permit people to “discriminate” on the “basis of religion.” They protect business owners of all faiths from the obligation to participate in activities that violate their conscience — a slippery slope that doesn’t seem to bother Johnson one bit. Denying a Muslim American service (something Johnson, who once supported banning burkas, seems most concerned about) would still be against the law.

Indeed. As I’ve explained before, the RFRA simply establishes that “Government may substantially burden a person’s exercise of religion only if” doing so not only serves a “compelling governmental interest,” but also if it’s the “least restrictive means” of doing so. When applying those tests to the abortifacient mandate, the Supreme Court found in the Hobby Lobby case that the government had other, less coercive ways to provide people with contraceptives if they really wanted to. The path to this conclusion didn’t run through any slippery slopes.

Going beyond the overly-convoluted, post-Lockean gymnastics of modern jurisprudence and simply evaluating the issue by the sort of back-to-basics natural rights theory that libertarians like Johnnson are supposed to excel at, there’s still not a slippery slope in sight. People have a right to follow the dictates of their conscience and/or faith in how they use their own life, liberty, or property, unless and until doing so deprives others of their life, liberty, or property — which simply and clearly establishes why these principles don’t establish a legal precedent to harm someone in the name of one’s religion.

The right to choose not to spend one’s own money on a particular item — one that kills other people, in this case — unmistakably falls within that sphere. An employer-employee relationship is a mutually-voluntary association that changes none of that (unless the former ever agreed to provide abortifacients in a contract, which is a separate issue). The employee has the right to spend her own money on whatever legal goods she chooses, but has no right to coerce her employers to spend theirs a certain way.

What I’ve just laid out is no different than what most serious libertarians, even many pro-choice ones, will tell you, making it all the more suspicious that their current standard-bearer disagrees.