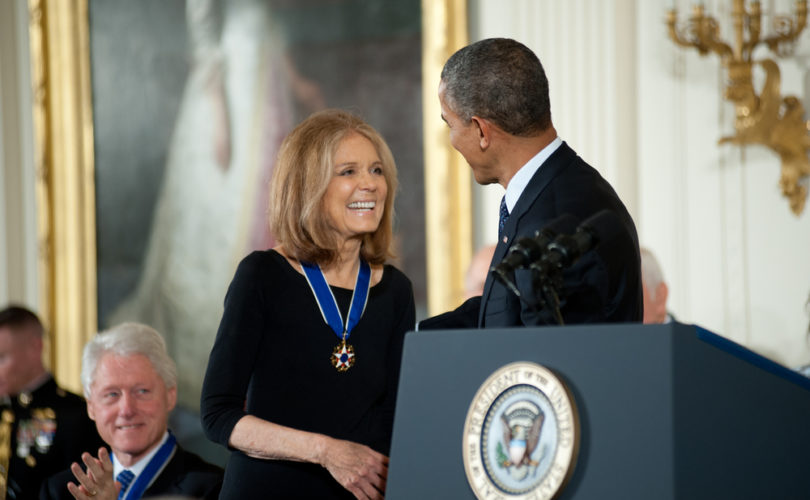 November 5, 2015 (NewsBusters) — Gloria Steinem doesn’t have her facts straight, but don’t expect the media to call her out on it.

On Tuesday, feminist activist Gloria Steinem appeared as a guest on PBS’ Tavis Smiley. During the show, Steinem praised abortion for giving her “my life” and bashed the controversy surrounding Planned Parenthood’s practice of aborted baby parts. She blamed the “attack” on Planned Parenthood on everything from the “ultra-right wing” to “patriarchy” and a “long-term racist system.”

Host Tavis Smiley hailed Steinem as a “feminist icon” and “renowned social activist” before asking about her newly published book, My Life on the Road.

From the beginning of the interview, Steinem recalled her own abortion as a young woman. Her life depended on the death of her unborn baby, she said – albeit phrased a bit differently.

“It gave me my life,” she insisted of the abortion. “I mean, I wouldn't have been able to live my life otherwise.”

Her story prompted Smiley to ask about the Planned Parenthood controversy following the videos released by the Center for Medical Progress. “What you make all these years later then, of what many regard as an attack on Planned Parenthood?” he wanted to know.

Steinem began by praising Planned Parenthood as “the single-most-popular supported organization” in the United States because “it has helped so, so, so many people.”

“Something like one in five,” she added (according to Planned Parenthood’s own numbers, that’s actually one in five women).

Besides, Steinem continued, with Planned Parenthood, “only about 1% of what they do has anything to do with abortion.”

Steinem’s claims only got worse, as she “explained” what inspired the recent “attack” on Planned Parenthood after videos revealed its practice with aborted baby parts.

“[The attack] is part of an ultra right-wing attempt to restore the basis of patriarchy or a male-dominant system and the necessity of a long-term racist system which is controlling reproduction,” she began. “And to control reproduction, you have to control the bodies of women.”

Because the criticism of Planned Parenthood could never be about what the pro-life movement says it is: saving unborn lives from death and ghoulish desecration.

What’s more, she demanded, women have every right to take over the world from men through reproduction. Steinem continued:

“So there is a huge backlash against what is a majority opinion in this country that this is an individual human right. It's part of bodily integrity. The government shouldn’t intervene. Politicians don't make this decision. But there are people on the other side who firmly believe the contrary and that this is – and it is, in fact – the beginning of the hierarchy they believe in.”

Smiley chimed in again to ask Steinem about the “debates about reproductive freedom and about women's rights” led in “our body politic by men to begin with.”

(At least she didn’t reiterate how the pope caused global warming by “forcing women to have children.”)

Steinem again pointed to “authority” and “control” tied-in with democracy and nationalism.

“So the question is, who controls a woman's body? Herself, which seems to me a requisite of it's a basic human right. It's a requisite of democracy. But without controlling reproduction, you lose control of nationalism, which has two pillars, which is territory and population. You lose the ability to decide how many workers, how many soldiers, what class, what race and so on.”

On abortion, Steinem concluded that “it's helpful to realize that we are not dealing with human nature here,” but with a “political system.”

And, you know, human lives, Ms. Steinem. Freedom based on the destruction of others’ liberty isn’t freedom at all.