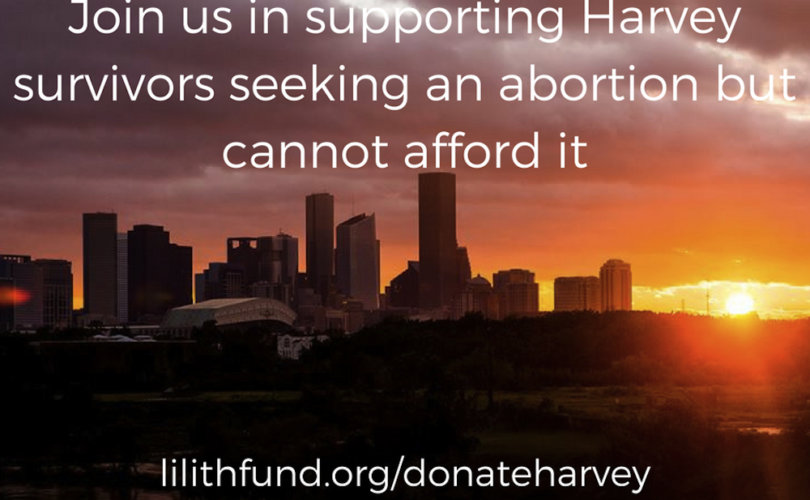 Her statement came after the Lilith Fund announced that it was raising money for “emergency” abortions in post-Hurricane Harvey Texas.

Brown continues, “How callous and disgusting can any pro-abortion charity (excuse the word) get? We should be doing all we can to help everyone suffering from this tragedy created by Hurricane Harvey, not adding to the death and destruction. God help us when the best response some can give is to suggest that killing babies is a charitable thing to do.”

National Review’s Alexandra Desanctus said, “[T]he Lilith Fund and its supporters are focusing their energy not on helping hurricane victims rebuild their lives but rather on taking the lives of unborn Texans.”

Also referring to the fundraising effort, Sean Davis, co-founder of The Federalist, said:

This is a great investment if you think the biggest problem with Harvey is that it didn't kill enough people. https://t.co/ZtbRkzCn0U

The Lilith Fund’s Facebook page states, “We're creating an emergency fund for Harvey survivors seeking abortion care. With increased barriers like temporary clinic closures, displacement, loss of homes/vehicles, and more, access to abortion just got even more difficult for those affected by Harvey. Donate to our emergency fund … ”

According to National Review, “The National Network of Abortion Funds, NARAL Pro-Choice Texas, and the Women’s March, along with left-wing activists, quickly voiced support for the fund as an important way to help those affected by Harvey.”

“The women of Texas seeking abortion care have always needed our help, but now they need it more than ever.” #Harvey https://t.co/w7SNb5Umyk