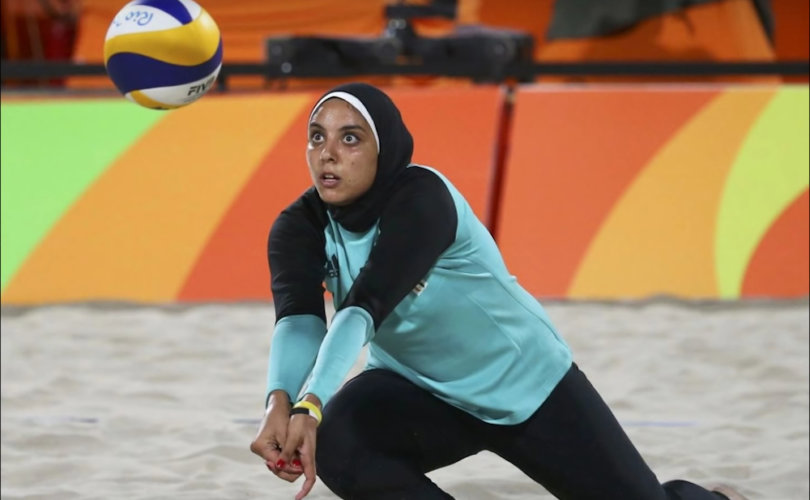 August 16, 2016 (LifeSiteNews) — A recent photo of Egyptian and German beach volleyball players competing against each other at the Rio Olympics has made waves across the world, and it’s easy to see why. The photo shows the fruits of two incompatible ideologies: secularism and Islam.

The German athlete, Kira Walkenhorst, is wearing a bikini, the standard for beach volleyball.

The Egyptian athlete, Doaa Elghobashy, is wearing a hijab, and the only skin she’s showing is her hands, face, and feet.

In France, more and more municipalities are banning so-called “burkinis,” full-body Muslim swimwear, claiming that such garb oppresses women and goes against the country’s laws on secularism.

I doubt I would ever wear a burkini, but it’s nothing short of tyrannical for the government to prevent women from going swimming with their bodies covered. What happened to pro-choice?

Secularism objectifies women’s bodies, promotes promiscuity as liberating, and denies that religion should have any role in society. On the other hand, many see Islam as limiting women’s authentic freedom by insisting they completely cover their hair, bodies, and sometimes even their faces.

As evidenced by cultural clashes across Europe and the United States, radical secularism and Islam can’t coexist for long.

There’s a third way, one that neither objectifies nor oppresses women. It’s the Catholic Church’s teaching. It respects the role of femininity in society. It teaches that women are to be cherished. It teaches that we can imitate the “feminine genius” perfectly exemplified by Mary, the mother of God.

Perhaps the Catholic Church’s relevant, loving teaching can be the force that reconciles Western society’s urge for ultra-secular laws and the ultra-conservative Islamic ideology that may seem to be the only alternative.