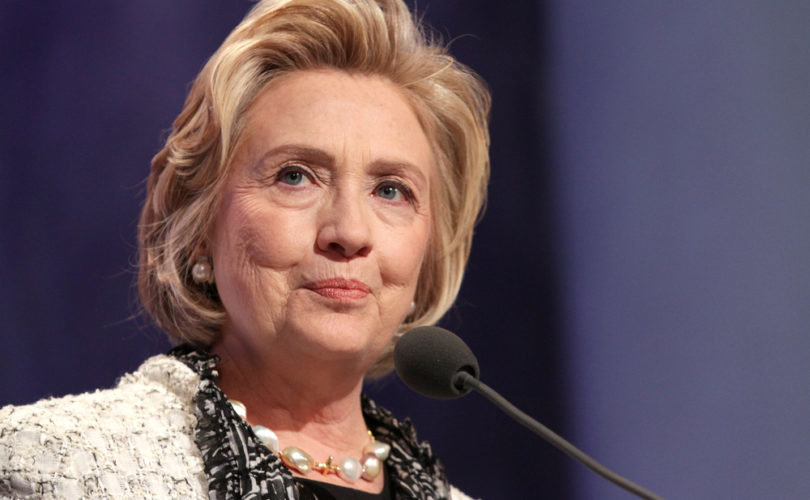 On Friday, former US Secretary of State Hillary Clinton was a keynote speaker at a two-day conference of international feminists in New York.  During her remarks, she was asked whether the United States was likely to ratify the international treaty to combat discrimination against women, known as CEDAW.

The question prompted laughter from the audience, and then Clinton gave her answer:

“Well, you would think the answer was likely…but honestly, as a senator who tried, as a secretary of state who tried, we have to change the Senate and try to get people who will support that, I mean, we submitted the disabilities treaty which you would have thought would have been pretty much…easy to pass.  It was modeled on the Americans with Disabilities, and even Bob Dole on the floor of the Senate couldn’t get the votes that were needed.  On CEDAW, we are just still struggling to try to get a favorable committee that would then pass it on to the floor and try to get the votes for it.”

She went on to say:

“The short answer is, not for lack of trying, but for absence of support, and we just have to keep working on it.  It is embarrassing, I mean, really, it’s embarrassing.”

Her embarrassment was shared by John Podesta, who was White House chief of staff during the Clinton administration, a co-chairman of President Obama’s transition team.  During his remarks on Thursday, the current chair of the liberal think tank Center for American Progress said:

Both Clinton and Podesta alluded to the repeated failure of the US Senate to ratify the Convention on the Rights of Persons with Disabilities (CRPD), which has been generally regarded as less controversial than CEDAW.

Robert Menendez, a Democratic Senator and Chairman of the Senate Foreign Relations Committee, alluded to the US’s general reluctance to bind itself to UN treaties – inadvertently slighting the importance of the issues facing those with disabilities in the process.  In a November, 2013 interview on PBS, he said:

Emphasis on “substantive” rather than “any.”

Given that former Secretary Clinton’s speech Friday was to a room full of leaders in the global pro-abortion movement, motherhood and apple pie probably weren’t in much demand there either.