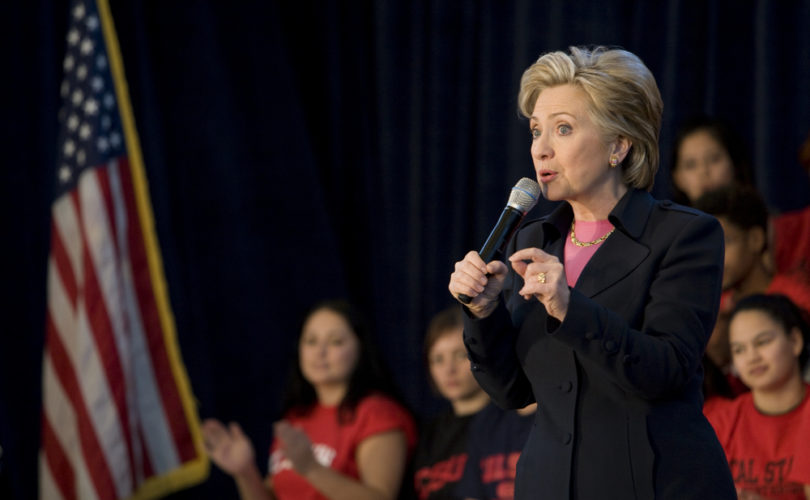 April 13, 2015 (JillStanek.com) — Hillary Clinton’s presidential campaign was officially launched yesterday via a video carefully crafted to give the impression she loves pregnant mothers, children and families.

I see Obama 3.0 ahead, wherein the pro-life community sees and speaks right through Clinton’s lies while liberals, abortion proponents, and the mainstream media cover up the truth, which is that Hillary Clinton supports this:

and has stated, “government should have no role” in abortion.

In other words, Hillary Clinton supports the Wild West of Abortion.

But becoming a grandmother to a baby she would have okayed Chelsea aborting by suctioning the brain out of her half-delivered body has somehow stirred Clinton onward. Quoting from The Hill, April 10:

“Becoming a grandmother has made me think deeply about the responsibility we all share as stewards of the world we inherit and will one day pass on,” she said. “Rather than make me want to slow down, it has spurred me to speed up.”

She describes receiving gifts from women around the country when Charlotte was born. Among them, she says, was a quilt with panels depicting different part of Clinton’s daughter Chelsea’s life.

“I wondered for a moment what a quilt of my own life would look like,” she said. “There were so many people who had taught me so much. And now I had one more. In just a few months, Charlotte had already helped me see the world in new ways.”

“There was so much more to do. So many more panels waiting to be filled in. I folded up the quilt and got back to work.”

I’ll tell you what. No one in their right mind would want to own a quilt made of Hillary Clinton’s pro-abortion panels. Such a quilt would be sick, demented – but merely a reflection of her.

But there are a lot of sick people in America today.  With 57 million little Americans dead by abortion, justice is coming.

We began to see that justice dispensed in the election and re-election of Barack Obama. As Dick Cheney said on April 7:

If you had somebody as president who wanted to take America down, who wanted to fundamentally weaken our position in the world and reduce our capacity to influence events, turn our back on our allies and encourage our adversaries, it would look exactly like what Barack Obama’s doing. I think his actions are constituted in my mind those of the worst president we’ve ever had.

And Cheney didn’t even mention Obama’s most heinous work: Abortion advocacy – keeping the abortion spigot open to abortion groups not only in the U.S. but around the world; appointing pro-abortion judges to the bench; expanding taxpayer funding of abortion in Obamacare; forcing religious objectors to personally pay for abortions and abortion drugs; and trying to remove conscience protections from medical professionals. Not to mention his executive order granting new taxpayer funding of human embryo experimentation.

Hillary Clinton wants to grab the abortion baton from Obama and run with it, wrapping herself in her abortion quilt when she crosses the finish line.

“When families are strong, America is strong,” says Hillary in her new ad.