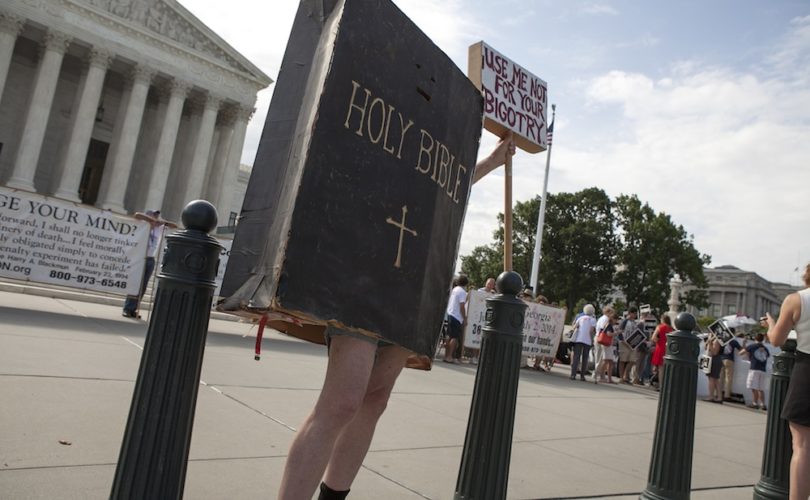 An abortion activist protests at the Supreme Court on June 30, 2014 as the justices released their ruling in the Hobby Lobby case.American Life League

The Supreme Court's 5-4 decision in the Burwell v. Hobby Lobby case has caused a bit of consternation among pro-abortion fanatics. The ruling makes the following statements:

Although many of the required, FDA-approved methods of contraception work by preventing the fertilization of an egg, four of those methods (those specifically at issue in these cases) may have the effect of preventing an already fertilized egg from developing any further by inhibiting its attachment to the uterus. . . .

They therefore object on religious grounds to providing health insurance that covers methods of birth control that, as HHS acknowledges, see brief for HHS in No. 13-354, at 9, n. 4, may result in the destruction of an embryo.

In each statement, the scientific fact is enunciated that there are forms of chemical contraception that do in fact work in several ways—-one of which destroys the embryo because the lining of the woman's uterus is made inhospitable to the embryonic human being.

As WebMD puts it:

But this has not stopped the abortion cartel from screaming bloody murder that the decision must be condemned because it sets a dangerous precedent for women's healthcare.

They suggest that there are three lies that were reinforced by the SCOTUS ruling yesterday.

Alleged Lie #1: Birth control is the same as abortion.

Fact#1: Birth control has three modes of action, one of which does in fact destroy human beings prior to implantation. Therefore, birth control can be the same as abortion.

Alleged Lie #2: Birth control should be separated from other types of medical services.

Fact #2: The birth control pill and its progeny do not treat a medical condition, but rather are promoted as a way for women to avoid pregnancy. Therefore, these pills are not actual medical services but are, in fact, recreational drugs.

Alleged Lie #3: It's easier for the government to pay for people's birth control so that companies don't have to.

Fact #3: The government should never have gotten into the business of providing payment for contraceptives or abortion in the first place. Neither is healthcare, and neither is good for women or babies.

The last word is this: Abortion mongers never met an abortion they did not like. They have never seen an act of killing a preborn baby that they did not think the government—-meaning taxpayers—-should pay for, no matter what the cost in human lives or women's health.

The least they could do is tell the truth.