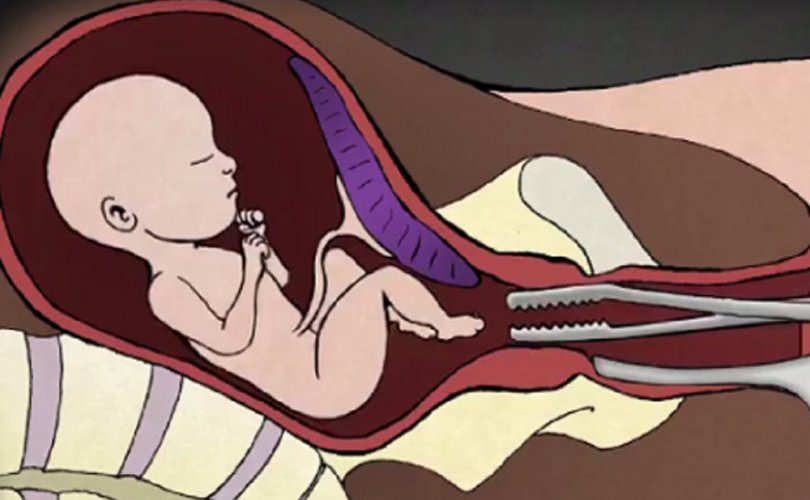 January 31, 2019 (LifeSiteNews) – Democrats and professional pro-abortion activists are in overdrive attempting to explain why a new New York law, and a proposed Virginia law that include language legalizing abortion up to birth with almost no meaningful restrictions are normal, moderate proposals.

It's easy to get confused by the rhetoric: a “blob of tissue,” a “woman's right to choose,” etc. That's why it's important to look at exactly what happens during a third-trimester abortion. Fortunately, it's not hard to find out.

Again, these are the exact words of a current practicing late-term abortionist, not someone with an ax to grind against abortion. He describes, in precise medical detail, the process of dismembering a still-living late-term unborn baby. Try to read this testimony without feeling nauseous about what is being described. This is what New York has legalized, and what Virginia wants to legalize.

Q: Are there times when you don’t remove the fetus intact?

Q: Can you tell me about that – when that occurs?

Carhart: That occurs when the tissue fragments, or frequently when you rupture the membranes, an arm will spontaneously prolaps through the os (cervix)…

Carhart: My normal course would be to dismember that extremity and then go back and try to take the fetus out either foot or skull first, whatever end I can get to first.

Q: How do you go about dismembering that extremity?

Carhart: Just traction and rotation, grasping the portion that you can get a hold of which would be usually somewhere up the shaft of the exposed portion of the fetus, pulling down on it through the os, using the internal os as your counter traction and rotating to dismember the shoulder or the hip or whatever it would be. Sometimes you will get one leg and you can’t get the other leg out.

Q: In that situation… Are you… When you pull on the arm and remove it, is the fetus still alive?

Q: Do you consider an arm, for example, to be substantial portion of the fetus?

Carhart: In the way I read it, I think if I lost my arm, that would be a substantial loss to me. I think I would have to interpret it that way.

Q: And then what happens if you remove the arm? You then try to remove the rest of the fetus?

Carhart: Then I would go back and attempt to either bring the feet down or bring the skull down, or even sometimes you bring the other arm down and remove that also and then get the feet down.

Q: At what point is the fetus… Does the fetus die during that process?

Carhart: I don’t really know. I know that the fetus is alive during the process most of the time because I can see the fetal heartbeat on the ultrasound.

The Court: counsel, for what it’s worth, it still is unclear to me with regard to the intact D&E when fetal demise occurs.

Q: Okay, I will try to clarify that. In the procedure of an intact D&E where you would start foot first, with the situation where the fetus is presented feet first, tell me how you’re able to get the feet out first

Q: At the time you bring out the feet, in this example, is the fetus still alive?

Q: Then what’s the next step you do?

Carhart: I didn’t mention it. I should. I usually attempt to grasp the cord first and divide the cord, if I can do that.

Q: What is the cord?

Carhart: The cord is the structure that transports the blood, both arterial and venous, from the fetus to the back of the fetus, and it gives the fetus its only source of oxygen, so that if you can divide the cord, the fetus will eventually die, but whether this takes 5 min. or 15 min. and when that occurs, I don’t think anyone really knows.

Q: Are there situations where you don’t divide the cord?

Carhart: There situations when I can’t.

Q: What are those?

Carhart: I just can’t get to the cord. It’s either high above the fetus and structures where you can’t reach up that far. The instruments are only 11 inches long

Q: Let’s take the situation where you haven’t divided the cord because you couldn’t, and you have begun to remove a living fetus feetfirst. What happens next after you have gotten the feet removed?

Carhart: We remove the feet and continue with traction on the feet until the abdomen and the thorax come through the cavity. At that point, I would try… You have to bring the shoulders down, but you can get enough of them outside, you can do this with your finger outside the uterus, and then at that point the fetal… The base of the fetal skull is usually in the cervical canal.

Carhart: And you can reach that, and that’s where you would rupture the fetal skull to some extent and aspirate the contents out.

Q: At what point in that process does fetal demise occur between initial remove… Removal of the feet or legs and the crushing of the skull or – I’m sorry – the decompressing of the skull?

Carhart: Well, you know, again, this is where I’m not sure what fetal demise is. I mean, I honestly have to share your concern, your honor. You can remove the cranial contents and the fetus will still have a heartbeat for several seconds or several minutes; so is the fetus alive? I would have to say probably, although I don’t think it has any brain function, so it’s brain-dead at that point.

Q: So the brain death might occur when you begin suctioning out of the cranium?

Carhart: I think brain death would occur because the suctioning to remove contents is only two or 3 seconds, so somewhere in that period of time, obviously not when you penetrate the skull, because people get shot in the head and they don’t die immediately from that, if they’re going to die at all, so that probably is not sufficient to kill the fetus, but I think removing the brain contents eventually will.”