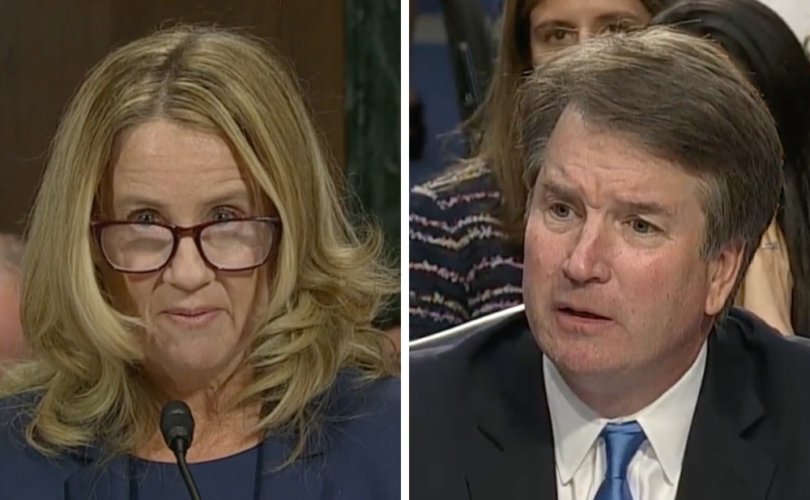 Fox's Chris Wallace proclaiming that Ford's testimony was "extremely credible", based on just her performance during the hearings.Fox News video frame capture

October 1, 2018 (LifeSiteNews) –Breitbart's John Nolte smashes any thought that Christine Blasey Ford's testimony against Judge Kavanaugh was credible – regardless of what Fox News and other media commentators proclaimed:

By any standard of truth, fairness, classical liberalism, evidence, and facts, Dr. Ford is not only not credible, she is nothing close to credible.

Let me count the ways…

She has aligned herself with the far-left.
She straight-up lied about being afraid to fly.
She said she wanted anonymity but continually reached out to the far-left Washington Post.
Her polygraph is a farce.
Her story has been carefully weaved into a Kafka-esque nightmare no man (even with detailed calendars) can ever escape from.
Every single one of her witnesses refutes her story — has no memory of the gathering in question or says it doesn’t happen, and this includes a lifelong friend.
Her team was so desperate to have The Woman Who Wants Anonymity to testify publicly, they turned down the opportunity to have her questioned in private at her home in California — and then lied about it.
Ford’s therapist’s notes from 2012 also refute here tale, even as the media and Democrats try to gaslight us into believing the opposite. Ford originally claimed four boys tried to rape her when she was in her late teens in the mid-eighties. Now she says it was one rapist and one bystander when she was 15 in the early eighties.
Ford refused to give her therapist’s notes to the Senate Judiciary Committee.
In the statement she wrote out in her farce of a polygraph test, Ford crossed out “early 80’s” so it would only read “80’s.”

And the points made go on and on …

Read the rest of it here. Very compelling.

Nolte ends the article with

A man’s life and career and name and reputation are on the line, his accusers actions and accusations are, by any standard, equal parts deceptive, dishonest, and implausible… And there was Fox News spreading the fake news that 2 + 2 = 5.

Kavanaugh hearings and the search for truth

Enough already: Dems will go to any lengths to destroy men like Brett Kavanaugh

False accusations like the ones against Kavanaugh have gotten men killed

Kavanaugh hearings prove McCarthyism is alive and well in US Senate

The Kavanaugh show trial looks like something from the Soviet Union

Why Kavanaugh’s appointment could endanger the international abortion industry

‘I am a pro-law judge’: Kavanaugh’s opening remarks to Supreme Court confirmation hearing