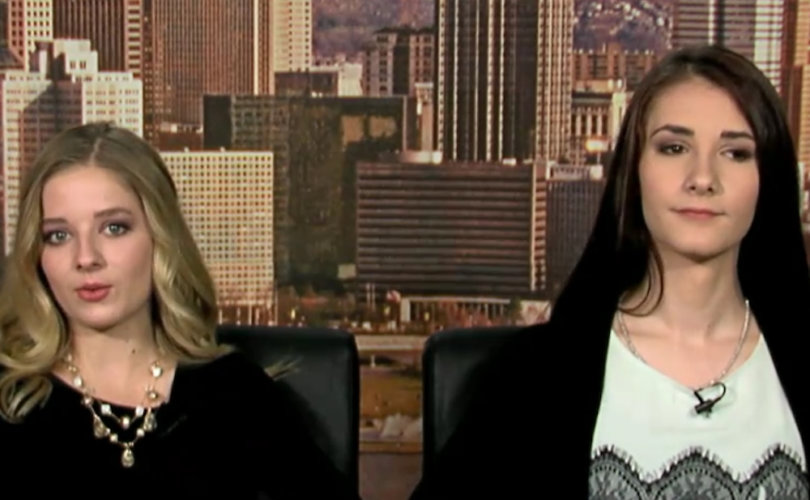 February 23, 2017 (LifeSiteNews) — Opera singer Jackie Evancho wants President Trump to meet with her and her gender-confused brother to educate Trump about “transgender rights” after the White House rescinded a federal mandate pushing schools to allow “trans” students to use opposite-sex restrooms and locker rooms.

Evancho, who sang at Trump's presidential inauguration, has a biological brother who is living as a “girl.” He now goes by Juliet. The two of them appeared today on ABC’s “Good Morning America” (GMA) after she tweeted yesterday:

. @realDonaldTrump u gave me the honor 2 sing at your inauguration. Pls give me & my sis the honor 2 meet with u 2 talk #transgender rghts ❤

Of course, GMA host George Stephanopoulos refers to Juliet as Evancho’s “transgender sister” in the interview. As a rule, the media use politically correct pronouns when it comes to identifying “transgender” individuals and covering LGBT stories.

Evancho said she was “disappointed” when she heard about Trump reversing the Obama “transgender” mandate “and I realized that we would need to take action in order to enlighten the administration on everything.”

Asked what she would like to tell Trump, Evancho told GMA, “I guess I just want to enlighten him on what my sister, I’ve seen her go through every single day in school and people just like her, what they deal with. The discrimination, it’s terrible.”

Her brother, “Juliet,” with a naturally deeper male voice but wearing a white-and-black dress, told GMA that he would tell Trump: “Basically that being at a high school where the policies on the bathroom are unclear… I kind of live it every day, going through discrimination.”

“I’ve had things thrown at me. I’ve had people say pretty horrible things and the unsafe environment is just very unhealthy,” Juliet said, “so I feel like Donald Trump needs to know that being in such an unsafe environment won’t do any good not only for the transgenders and the LGBTQ community but as well as everyone as a whole.”

Ironically, since the Obama transgender policy was blocked in court, or for whatever reason, Juliet says its reversal by Trump will have no effect him or his school.

Asked by Stephanopoulos, “Has your school overall been protective of you?” Juliet said, “Overall, yes.”

So there you have it. As social conservatives are saying in Texas, where a bill that would keep gender-confused people from entering opposite-sex restrooms is being debated, local schools can set their own policies protecting every child, including the gender confused, without intrusive federal intervention that violates others’ basic privacy.

The central logical fallacy in the Evancho story — as in much of the debate over LGBTQ issues — is that because you are related to someone who is gender-confused, or are friends, or love someone who struggles in this area, you are morally required to support “transgender rights.”

Yes, and especially as Christians, we are called to love people caught up in these destructive movements, but tough love means saying no to harmful behaviors and ideas, as we must do with our children from time to time.

That is why we would be wise to heed the counsel of Dr. Michelle Cretella, president of the American College of Pediatricians, who warns against “promoting a political agenda over science and the well-being of innocent children” by celebrating gender-confusion in the name of “rights.”