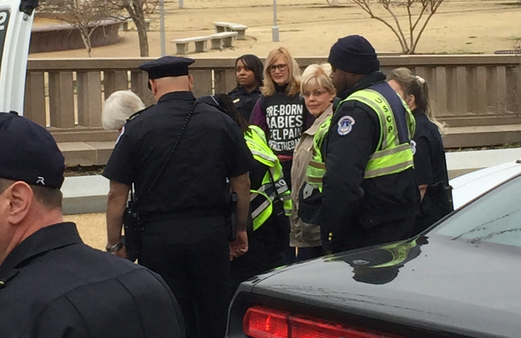 April 10, 2015 (JillStanek.com) — On March 25 I was one of eight people arrested outside Speaker Boehner’s office in Washington, DC, as we protested the House GOP’s failure to pass the Pain Capable Unborn Child Protection Act two months after they had failed to pass it on the day they’d promised to pass it.

One of our two goals was to get movement on this 20-week abortion ban, when movement had otherwise stalled by all outward appearances (the other goal being to refocus attention back on the 20-week-plus preborn baby, who feels the excruciating pain of being torn limb from limb when aborted).

Once our protest was announced, we learned movement had indeed stalled. Several sources confirmed the hold-up was with amended language.

Amazingly, the bottleneck was unclogged just one week before our protest, when more than one solution was suddenly presented to interested GOP House members. They went from 0 to 200% in just a few short days.

Nonetheless, no vote was announced before our protest. Then, on March 30, the congressional Easter Break commenced, which will run through April 10.

We are hopeful GOP House leadership has not let the Easter Break interfere with reactivated plans to move the Pain Capable Act forward. We are hopeful there will be an announcement of a vote soon after representatives return to Washington.

But we are not waiting. The movement to press GOP House leadership to vote on this bill is growing, from three pro-life activist groups to 11. Last week this larger group announced plans to hold a protest at Speaker Boehner’s office on May 7, at 12:00 p.m., if by that time the House has not yet passed the Pain Capable Act. This group includes:

Other groups are most certainly welcome. Please email me if interested. And if you live in the DC area, please make plans now to attend.

To be clear, the vote must have happened by May 7 for us to call off our protest. It won’t be enough to announce an upcoming vote date. Been there, done that, been burned.

Also, be sure to sign Concerned Women for America’s petition.