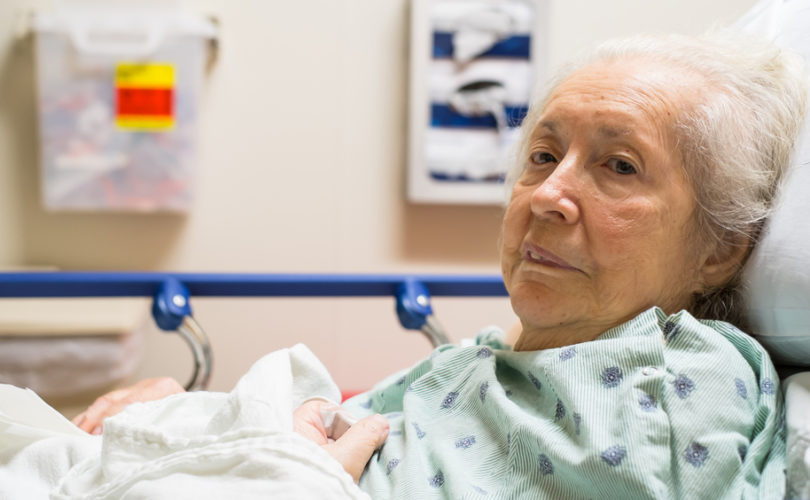 Immoral bioethical policies and practices advance toward implementation through discourse–first in professional journals, and then in elite popular media columns.

That process is now gearing up regarding what I call “VSED-by-Proxy.”

VSED stands for “voluntary stopping eating and drinking”–suicide by self-starvation–pushed for the elderly and others by those compaaaaa–ssssss–ionate death zealots at the Hemlock Society Compassion and Choices.

But what about mentally incompetent residents of nursing homes who willingly eat, but who years previously stated in an advance medical directive that they wanted to be made dead by starvation under such circumstances?

We see increasing advocacy in bioethics that nursing homes be required to starve such patients to death–even if they are then happy, even if they willingly eat, and even, one supposes, if they ask for food. In other words, the idea is that the demented patient is incompetent to decide to eat if he had earlier directed that he be starved to death!

And now VSED-by-Proxy has been validated by respectful reportage in the New York Times. From, “Complexities of Choosing an End Game for Dementia,” by Paula Span:

Jerome Medalie keeps his advance directive hanging in a plastic sleeve in his front hall closet, as his retirement community recommends. That’s where the paramedics will look if someone calls 911. Like many such documents, it declares that if he is terminally ill, he declines cardiopulmonary resuscitation, a ventilator and a feeding tube.

But Mr. Medalie’s directive also specifies something more unusual: If he develops Alzheimer’s disease or another form of dementia, he refuses “ordinary means of nutrition and hydration.”

A retired lawyer with a proclivity for precision, he has listed 10 triggering conditions, including “I cannot recognize my loved ones” and “I cannot articulate coherent thoughts and sentences.” If any three such disabilities persist for several weeks, he wants his health care proxy — his wife, Beth Lowd — to ensure that nobody tries to keep him alive by spoon­feeding or offering him liquids

This is an extremely dangerous culture of death aggression because it would erase the boundary between medical treatment that can be refused–and basic humane care, no different ethically from turning a patient to prevent bed sores or providing hygiene–which all patients are required to receive regardless of their condition.

Just as an advance directive instructing that a patient not be kept clean should be disregarded, so too should an order to starve the patient who willingly eats.

This too is important: VSED is suicide. Legally requiring nursing homes to commit VSED-by-proxy would be forcing them to kill—and to kill cruelly. A legal regimen that forced medical personnel to assist a patient’s suicide by starvation would drive many doctors and nurses out of medicine.

After all, most doctors and nurses want to be healers, not killers.  And how safe would we be in other areas of medicine if the professions were filled with people who would willingly starve patients to death when they happily eat.

But let’s not kid ourselves. VSED-by-proxy is a stalking horse for opening the door to lethally injecting Alzheimer’s patients, and probably doing so en masse. After all, why force anyone to undergo a slow and potentially agonizing death by VSED or VSED-by-proxy when he or she can be dispatched quickly?

Euthanasia pursuant to advance directive is already practiced in the Netherlands and Belgium. It is possible that this has been the stealth goal from the time advocacy for removing feeding tubes from incompetent patients began decades ago—and that now, with the open advocacy of VSED and VSED-by-proxy, the real agenda is finally coming out into the open.