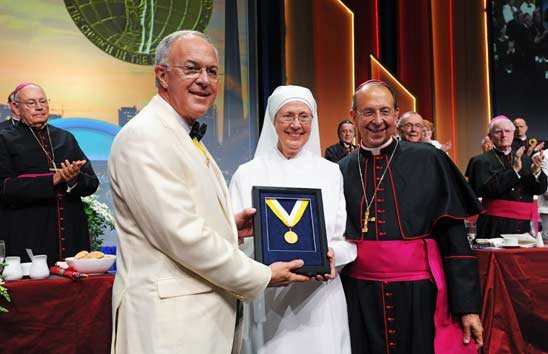 TORONTO, August 8, 2016 (LifeSiteNews) – On August 2, at their annual four-day Supreme Convention, the Knights of Columbus bestowed their highest award on the Little Sisters of the Poor in recognition of their apostolate to the sick and elderly, and, in particular, in honor of their high-profile battle for religious liberty against the Obama administration's HHS mandate.

Below are some excerpts from the Knights' statement on the award. The full statement is here.

The selfless charity and intrepid spirit of a congregation of religious sisters were recognized at the States Dinner as the Knights of Columbus bestowed its highest honor, the Gaudium et Spes Award, on the Little Sisters of the Poor.

Held Aug. 2, on the evening of the first day of the Supreme Convention in Toronto, the annual States Dinner was attended by many members of the Church’s hierarchy and other clergy, and by more than 2,000 Knights and their family members.

The Little Sisters of the Poor were chosen as the 12th recipient of the prestigious Gaudium et Spes Award for their witness to the Gospel in caring for the elderly poor, and for standing up in recent years for religious liberty against a U.S. government mandate that would require them to violate their consciences. Founded in France by St. Jeanne Jugan, the congregation operates 27 homes for the sick and dying in the United States.

In challenging the government mandate that would force the sisters to provide contraception and abortion-causing drugs in health plans for their employees, the Little Sisters “insisted that our Catholic faith cannot be divided or compartmentalized,” said Supreme Chaplain Archbishop William Lori, who read the citation for the award. “The teachings of the faith they cherish are based on the love they have for God and the poor whom they serve each day.”

He continued, “These sisters could no more comply with coercive government mandates than they could abandon the poor, the elderly and the dying.”

Accepting the award on behalf of the congregation, Mother Loraine Marie Maguire, mother provincial of the Baltimore Province, said that the sisters never would have chosen to be witnesses for religious liberty by challenging a government mandate. But the sisters knew that they had to stand up in order to continue their care for the poor, the sick and elderly with a clear conscience, she stated.

Through three years of court battles, she noted, the congregation has been supported by prayers, good wishes and legal expertise, including assistance from the Knights of Columbus. Looking out at the thousands of supporters at the dinner provided her with “a glimpse of the heavenly banquet,” she said.

The inaugural Gaudium et Spes Award was given in 1992 to Mother Teresa of Kolkata. It includes a medal and a $100,000 honorarium. This year was the first time that the award was bestowed upon a religious community rather than an individual.

Here is a press release on the award from the Little Sisters' legal firm, The Becket Fund for Religious Liberty:

For the Little Sisters of the Poor’s  service to the elderly poor and commitment to their Catholic beliefs, the Knights of Columbus awarded its highest honor the Gaudium et Spes Award. Knights of Columbus Supreme Knight, Carl Anderson, presented the award to Mother Loraine Marie Maguire, Superior of the Sisters’ Baltimore Province on August 2 at the Allsteam Centre in Toronto, host city of the Knights’ yearly convention.

“It is a privilege for us to care for the most vulnerable members of our society; serving them, comforting them, being a loving and healing presence in their lives,” said Mother Loraine Marie Maguire, mother provincial for the Little Sisters of the Poor. “Just being a ‘Little Sister to them’ is our joy.”

Founded in 1852 to serve the elderly poor, the Sisters are a “truly inspiring community of religious sisters for their wholehearted response to the Gospel, [and] for recognizing Jesus in the face of the poor,” noted the award citation, read by Knights of Columbus Supreme Chaplain Archbishop William Lori of Baltimore.

The Little Sisters became a household name when they were ordered to take actions that would have triggered coverage of drugs and devices, such as the week after pill, in their employee health plan. They stood firm in their refusal to do so in spite of the threat of $70 million per year in government fines. They appealed all the way to the U.S. Supreme Court, represented by the Becket Fund for Religious Liberty and supported by the generosity of the Knights. Last spring the Supreme Court told the government they could not fine the Sisters, vacated all lower court decisions against them, and instructed the government to work on a solution that respected the Sisters’ religious beliefs.

While in Washington, D.C. last year, Pope Francis visited the Little Sisters to show his solidarity. He later wrote: “Precisely for the sake of this dignity of conscience, the Church strongly rejects the forced state intervention in favor of contraception, sterilization, and even abortion.”

Named for the landmark Second Vatican Council document, the Gaudium et Spes (Joy and Hope) Award is the highest honor bestowed by the Knights of Columbus, the world’s largest Catholic fraternal benefit organization, which has more than 1.9 million members.

Awarded only in special circumstances to individuals of exceptional merit, the first recipient was Blessed Mother Teresa, in 1992, and the last recipient was the late Cardinal Francis George of Chicago, in 2015.