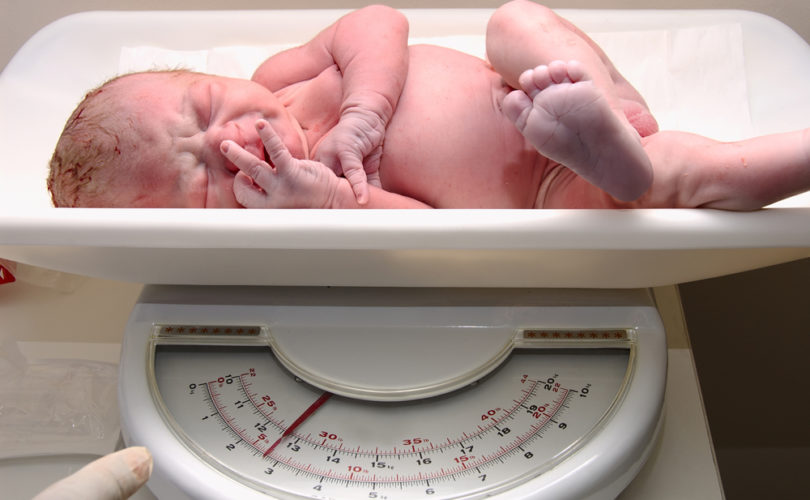 Babies were sometimes left to die naked a scale and the metal counter in the Soiled Utility Room.

July 27, 2015 (LiveActionNews) — Jill Stanek is a well-known pro-life blogger and activist who first became active in the pro-life movement when she exposed the practice of live birth abortions, which she witnessed while working at her job as a nurse at an Illinois hospital.

Stanek was working as a Labor and Delivery nurse at Christ hospital in Oak Lawn, Illinois, when she witnessed babies being aborted alive. Despite its name and affiliation with two Christian churches, late-term abortions were performed at Christ hospital.

I had been working for a year at Christ Hospital in Oak Lawn, Illinois, as a registered nurse in the Labor and Delivery Department, when I heard in report that we were aborting a second-trimester baby with Down’s syndrome. I was completely shocked. In fact, I had specifically chosen to work at Christ Hospital because it was a Christian hospital and not involved, so I thought, in abortion. It hurt so much that the very place these abortions were being committed was at a hospital named after my Lord and Savior Jesus Christ.

She describes the procedure that was used for these late-term abortions:

But what was most distressing was to learn of the method Christ Hospital uses to abort, called induced labor abortion, now also known as “live birth abortion.” In this particular abortion procedure doctors do not attempt to kill the baby in the uterus.  The goal is simply to prematurely deliver a baby who dies during the birth process or soon afterward.

These babies were then left to die unattended, or, in some cases, given to the mother to hold and comfort in their last moments. If a nurse had the time and was particularly compassionate, she could hold the dying child.

To commit induced labor abortion, a doctor or resident inserts a medication into the mother’s birth canal close to the cervix. The cervix is the opening at the bottom of the uterus that normally stays closed until a mother is about 40 weeks pregnant and ready to deliver. This medication irritates the cervix and stimulates it to open early. When this occurs, the small second or third trimester pre-term, fully formed baby falls out of the uterus, sometimes alive. By law, if an aborted baby is born alive, both birth and death certificates must be issued.  Ironically, at Christ Hospital the cause of death often listed for live aborted babies is “extreme prematurity,” an acknowledgement by doctors that they have caused this death.

Often, the babies did not die quickly:

It is not uncommon for a live aborted baby to linger for an hour or two or even longer. At Christ Hospital one of these babies lived for almost an entire eight-hour shift. Some of the babies aborted are healthy, because Christ Hospital will also abort for life or “health” of the mother, and also for rape or incest.

The Supreme Court case Doe v. Bolton found that in states where late-term abortion is prohibited, there must be a ‘health’ exception. The Court then went on to define ‘health' so broadly that nearly any difficulty the woman could face would qualify as effecting her health. It became a loophole that allows for virtually unlimited abortion on demand.

The babies, of course, were not given help to survive:

In the event that an aborted baby is born alive, she or he receives “comfort care,” defined as keeping the baby warm in a blanket until s/he dies. Parents may hold the baby if they wish. If the parents do not want to hold their dying aborted baby, a staff member cares for the baby until s/he dies. If staff does not have the time or desire to hold the baby, s/he is taken to Christ Hospital’s new Comfort Room, which is complete with a First Foto Machine if parents want professional pictures of their aborted baby, baptismal supplies, gowns, and certificates, foot printing equipment and baby bracelets for mementos, and a rocking chair. Before the Comfort Room was established, babies were taken to the Soiled Utility Room to die.

Some of these babies were old enough to survive if given proper medical care. It is horrifying to imagine these children, forced to be born too soon, gasping away their last few moments alone. It is perhaps even more horrifying that women who chose to kill their babies would want mementos of the child they paid to abort. While it may be true that in some cases the children were suffering from a fatal anomaly, more often than not, the babies were being aborted merely because they would have grown into disabled children.

For example, Stanek describes a child with Down Syndrome who was aborted:

One night, a nursing co-worker was taking a Down’s syndrome baby who was aborted alive to our Soiled Utility Room because his parents did not want to hold him, and she did not have time to hold him. I could not bear the thought of this suffering child dying alone in a Soiled Utility Room, so I cradled and rocked him for the 45 minutes that he lived. He was between 21 and 22 weeks old, weighed about 1/2 pound, and was about 10 inches long. He was too weak to move very much, expending any energy he had trying to breathe. Toward the end he was so quiet that I could not tell if he was still alive. I held him up to the light to see through his chest wall whether his heart was still beating. After he was pronounced dead, we folded his little arms across his chest, wrapped him in a tiny shroud, and carried him to the hospital morgue where all of our dead patients are taken.

This child, who would never even be given a name, died because he did not measure up to his parent’s standards.

Stanek also tells of the experiences of several other workers:

Another nurse from Christ Hospital also testified with me in Washington. Allison described walking into the Soiled Utility Room on two separate occasions to find live aborted babies left naked on a scale and the metal counter. I testified about a staff worker who accidentally threw a live aborted baby in the garbage. The baby had been left on the counter of the Soiled Utility Room wrapped in a disposable towel. When my coworker realized what she had done, she started going through the trash to find the baby, and the baby fell out of the towel and onto the floor.

Other hospitals have now admitted that they commit live birth abortion. It apparently is not a rare form of abortion. But Christ Hospital was the first hospital in the United States to be publicly exposed for committing this form of abortion.

Today, due to the efforts of Jill Stanek and other pro-lifers, this type of abortion is illegal. The Born Alive Infants Protection Act was signed into law in 2002. It states that any child born alive during an abortion must be given medical care the same way a premature wanted baby would be. There is, however, some question as to whether this act is being followed.

In 2013, Planned Parenthood lobbyist Alisa Lapolt Snow testified against a proposed Florida bill that similar to the Born Alive Infants Protection Act. The bill said that babies born alive after abortions would have to be given care. Asked what Planned Parenthood doctors did in the event that a baby was born alive during an abortion, she waffled and refused to answer the question, stating that she did not know. Finally, she said that the decision whether to let the baby live would be up to the doctor and the mother. Her responses shocked legislators. Planned Parenthood, of course, is the biggest abortion provider in the United States today.