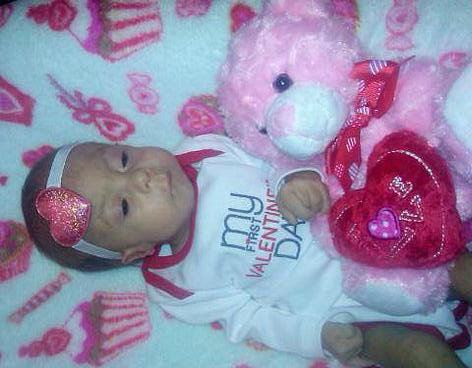 (Savethe1) – “I was offered termination at 23 weeks. That was the 4th doctor to offer it and she said God wasn't punishing me… And if I tried again there was only a 1% chance of it happening to me again.”

Jennifer Giddens was told that she was pregnant with a child who had Trisomy 18, also called Edwards Syndrome, which is similar to Down Syndrome, but much harsher. She was struggling to find a doctor who would help her. Finally on her fifth doctor, Jennifer met a pro-life obstetrician. He of course could not guarantee that her little Mary-Margaret would make it to term, but at least he was willing to help.

Mary-Margaret was born at 37.5 weeks, weighing 3 lbs. 6 oz. and only needed cpap breathing support for a few hours. A doctor who came to Jennifer’s room to discuss her condition said she had a heart defect, but central apnea (which is a breathing problem caused by the nervous system) would kill her before the heart issue. The doctor said she had a day…maybe a week.

Well, she was beating their expectations, and eight days later they took her home. Doctors always said Mary-Margaret was a candidate for surgery when the time came that she needed it. Jennifer talked to the surgeon personally a few times and she was reassured that the doctor was more than willing to perform the surgery. The cardiologist said Mary-Margaret needed to be 4 lbs. to have the required heart surgery.

Many children with Trisomy 18 struggle with heart and breathing issues, and Mary-Margaret was no different. Some time passed and her heart rate began to drop when she slept, so Jennifer took Mary Margaret to the hospital.

Now in the hospital with her daughter in need of the promised heart surgery, Jennifer was confronted with a harsh reality that most parents of Trisomy 18 children face…a heartless doctor.

Jennifer told me that “the attending doctor said on rounds that ‘there was a black cloud over M&M and it was coming…. real soon. That there was nothing to do, but surgery, and nobody would operate on a baby like her.’ She was yelling all of this outside the door,” so everyone could hear her.

And this is supposed to be a teaching hospital. Maybe the doctor felt everyone outside the room needed to learn that Trisomy 18 is “incompatible with life” and that HIPPA privacy laws don’t apply to her.

When the doctor walked in the room to talk, she asked what Jennifer knew about Mary-Margaret’s condition, and Jennifer said “enough to know there's hope for her.” The doctor responded, “If there were any older babies alive they didn't have a heart problem. That no one would do surgery on her because she was scrawny and she was struggling. And why would I want to prolong suffering.”

This doctor obviously did not care enough about this beautiful little child to do a little research and find out that many children with Trisomy 18 have heart surgery and 90% of them survive it. Oh, and most T18 children have heart issues, like the dozens of living children who we personally know, including our 6-year-old daughter Faith.

I have written several stories about parents like Jennifer and children like Mary-Margaret. Like Jennifer, we had to fight to get treatment for our daughter and now know parents from coast to coast who have similar stories. Our daughter almost died, but survived despite the doctors who thought she should die.

Jennifer is a brave mother who is willing to fight and allow me to tell her story, but her story is different from the other children. The difference? Mary-Margaret did not survive the doctors who thought she should be dead. Instead of working to end suffering and striving to prolong her life, the doctors refused surgery to Mary-Margaret.

Jennifer had to watch as her child struggle for her last breaths.

Are you sick to your stomach yet? This story is happening every day all across this country. I know because my wife and I experienced this with our daughter too and had the same comment made to us about prolonging her life.

Isn’t the entire medical industry based around the idea of prolonging life? Measles, rabies, small pox, and malaria are all diseases that cause suffering and death, yet doctors worked to prolong life and end the suffering of these patients. Because of innovation by life-loving doctors and their self-less work, these diseases can be wiped out and life prolonged for millions of people.

I have a novel idea. Let’s apply this type of innovation to every situation possible and see what great things can happen.

Brad Smith and his wife Jesi are Save The 1 pro-life speakers @ savethe1.com  from Rochester Hills, Michigan. Learn more about Brad and Jesi at www.keepingourfaith.com.

They refused to abort their baby boy with trisomy 18. Now he’s their ‘precious bundle of joy’
Elijah’s gift: Member of Parliament grateful for brief life of stillborn son with Trisomy 18

‘Utterly pro-choice’ comedienne refused to abort son with Trisomy 18: it was ‘the right choice’

Doctors refused to save this baby with Trisomy 18, but her parents fought tooth and nail. Now she’s thriving!