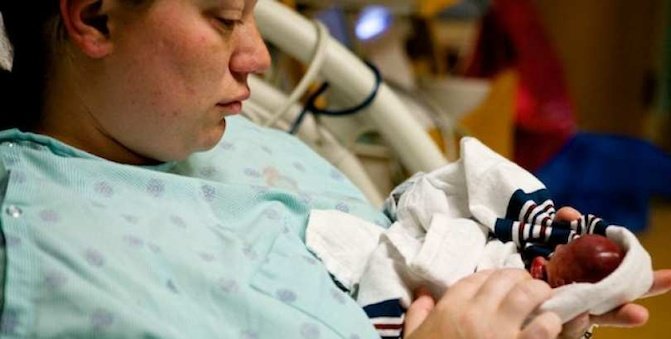 (Live Action News) – “Clump of cells.” “Tissue.” “Just a fetus.” These are common ways people who are pro-abortion describe the preborn in order to diminish the humanity of these new lives. But what people label the preborn is not what defines them, and that is proven by the life of one small child. In the summer of 2013, Walter Joshua Fretz was born at just 19 weeks’ gestation. He lived only moments, but his life has had a lasting impact.

Walter’s parents, Lexi and Joshua Fretz, mom and dad to two girls (who welcomed their third daughter, Mia, this September), were excitedly awaiting the arrival of their newest baby when, according to Lexi’s blog, she began experiencing spotting. This wasn’t unusual for her during pregnancy, but when the spotting turned pink she grew more concerned and called her midwife, who advised her to go to the ER.

In the ER, several pregnant women came in after her and were taken straight to the maternity ward. But since Lexi was not yet 20 weeks – she was 19 weeks and 6 days – the hospital rules required her to stay in the ER.  After about an hour, Lexi was able to hear her baby’s heartbeat and felt relieved, but as she waited for an ultrasound, Lexi began to feel the familiar pains of labor. Nearly five hours after arriving at the hospital, Lexi gave birth to her son, Walter Joshua Fretz. She writes:

I was crying so hard at this point, but he was perfect. He was fully formed and everything was there, I could see his heart beating in his tiny chest. Joshua and I both held him and cried over him and looked over our perfect, tiny son.

Joshua’s next decision seemed small and natural, but would end up being a life changer and even a lifesaver for many others. He went to the car to get Lexi’s camera so he could take photos of his son. At first, this was not something Lexi wanted, but the pictures of Walter soon spread across the Internet. The photos reached grieving mothers and helped them through the loss of their own babies, and they were used to help women choose life for their preborn children. Lexi has received so many positive messages and shared some, including:

Just came across Walter’s pictures… I am pregnant and been in such a bad place this week. Did my first scan last week and he’s a boy, too. But this week I started praying for a miscarriage or decide to terminate since his father has shirked all responsibility. I asked God to gimme a sign today that we will be fine, or I go ahead and seek a termination tomorrow. A few hours later I see the link on Facebook. It put me to tears. But most importantly it has made me know without a doubt that I cannot do this to him.

I used to believe that there were reasons to justify some abortions. […] And now seeing Walter there lying on your chest brings me to shame for my former opinions and to heartbreak for every woman who decides to terminate without understanding the value of the life within them.

I have always thought it was a woman’s choice to abort a pregnancy! Again lack of understanding thinking or rather being led to believe that at this stage a woman would be aborting a fetus ( mass of cells!) How wrong!!!  I’m glad you chose to share your story and beautiful photos of such a sad time in your life as you’ve educated me!

I’m pregnant 8 weeks and for 3 weeks of that I have been in total agony what to do weather to keep him/her or abort ( I’m not in a great position for children at the moment) but you have put my life into perspective, I can love this baby and “get by” so that’s enough now for me, I’m keeping this baby I’m carrying and I’m going to treasure him/her for eternity.

These photos of Walter show the humanity of the preborn child. They prove without a shadow of a doubt that this is a person, not a blob or a bunch of tissue. Which begs the question: Why is it legal to end the life of a preborn human?

“Just because the child within cannot be seen by us does not mean that it is a blob of cells,” writes Lexi. “Walter was perfectly formed and very active in the womb. If he had just a few short more weeks he would have had a fighting chance at life. […] In all our hurt, I am glad that some good can come out of this. I pray that the Lord will continue to use Walter’s photos to impact many.”

All photos courtesy of: F2 Photography by Lexi