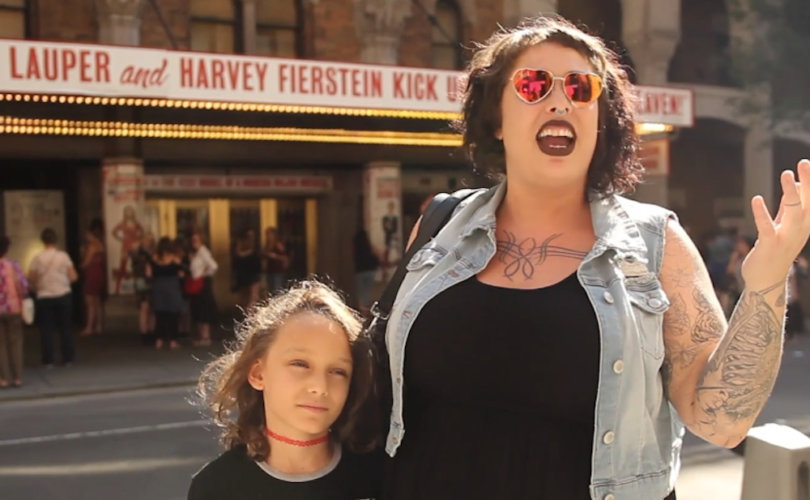 July 14, 2017 (LifeSiteNews) – A new interview shows just how invested the mom of an eight-year-old “drag queen” is in her son's performances.

As LifeSiteNews has previously reported, Nemis Quinn Mélançon-Golden is an eight-year-old from Montreal who performs in drag as “Lactatia.” He is making quite a name for himself since performing on stage in a May drag show at the Montreal stop of the “Werq the World Tour.”

Nemis and his mother, Jessica Mélançon, visited the cast of the Broadway musical Kinky Boots. The Advocate, a major gay news site, videotaped parts of the visit and interviewed Jessica about her son's cross-dressing hobby.

Kinky Boots is about “a fabulous drag queen” who gives a shoe factory owner “the idea to create ladies’ shoes for men,” according to a summary of the plot.

In The Advocate's video, drag queens excitedly greet Nemis backstage. They ask him what his favorite costume was, if he got some “inspiration for some looks,” and for how long he has been dressing up as a girl.

“I've been wearing tutus and stuff like that since I was so young,” Nemis told them, explaining his inspiration came from “Ru Paul's Drag Race.” He said he “always” used to wear his sister's tutus and princess dresses.

“Amazing,” one of the drag queens responded.

“I love that,” said another.

The older drag queens encouraged Nemis to do whatever he wants, regardless of what his parents think, he told The Advocate.

It doesn't seem likely that parental approval is going to be an issue, given how much Jessica seems to encourage her eight-year-old son to wear dresses and makeup.

Jessica has for a year been “learning the tricks of the drag trade, putting Lactatia in makeup, costume and nails,” The Advocate wrote. “Jessica books performances for Lactatia to lip sync, after which 100 percent of the star's earnings go to LGBT youth.”

She said Kinky Boots was an “amazing, amazing show” and she “had goosebumps and got teary-eyed and was like overwhelmed and it was amazing.”

“When he was little, he said, 'When I grow up I can be a girl with a penis if I want to.' And I was like, sure, sure you can buddy,” she told The Advocate. “We've had the most backlash from Christian groups. But we refuse to read any negative comments.”

In the video, Jessica smiles as Nemis insists on accepting an invitation to go backstage, where older men in wigs and makeup size him up.

Nemis or “Lactatia” is “projecting a persona” rather than being “authentic,” wrote Stella Morabito, an expert on cults and a former intelligence analyst, at The Federalist. “It’s obviously a persona he’s been groomed to project. Insecure kids will imitate and recite practically anything that gets them positive reinforcement.”

“The line has gotten so blurred and so confusing for children precisely because of today’s ideological agendas and polarization,” wrote Morabito. “Gender ideology doesn’t simply beckon children into a land of make-believe where they can change their physical sex if they just wish hard enough. It’s a one-way street that cuts off any escape hatch back to reality. This is not the exercise of healthy imagination, but more like cult programming.”

Indeed, to suggest that grooming children for a lifetime of sexual and gender confusion is anything other than heroic is to reject the groupthink of gender ideology.