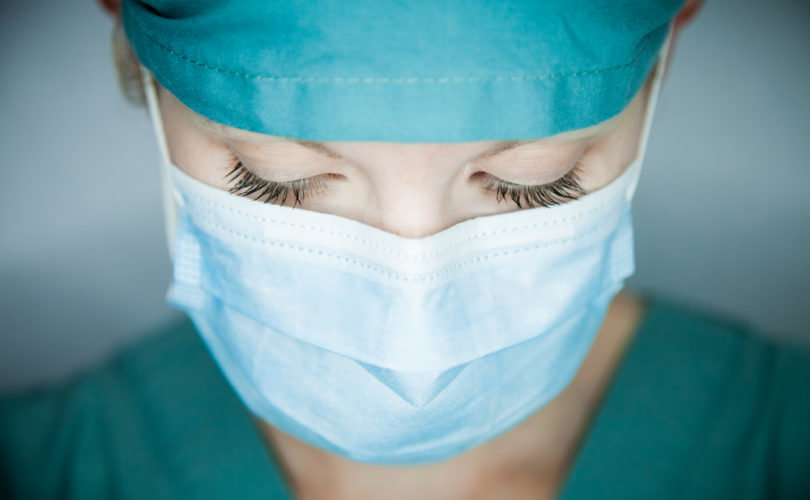 'I was standing there at the sink, crying my heart out.'

(LiveActionNews) – A pamphlet produced by Last Days Ministries entitled, “Abortion Clinics: An Inside Look” contained the testimonies of two former abortion facility workers. One worker who tells her story is Sam Griggs.

“They would just grab parts of the baby and pull them off. The baby would bleed to death. They would get an arm or a leg and the nurse would have to count everything that came out to make sure they got it all. It was horrible.”

Griggs talks first about the job interview. Some time ago, Planned Parenthood director turned pro-life activist Abby Johnson wrote about how abortion facilities often tell prospective employees that they will not be assisting in abortions.

Johnson said that since “no one grows up wanting to work in an abortion clinic” abortion facilities often promise new employees that they will not deal with the abortion procedure, or the bodies of aborted babies. Johnson describes a conversation she had with a abortion center worker who called her:

I sat silently and listened to her cry for 5 minutes. When she was able to calm down enough to talk, she simply said, “Why would they lie to me?” She went on to explain that when she went to interview with them, they had been very clear that she would NEVER be involved in abortion.

However, they slowly began to move her around the clinic…first a receptionist, then an educator, then working in the exam room “just setting up instruments,” then working next to the abortionist, then finally to the POC (products of conception) lab where she has been trained to piece babies back together after they had been aborted.

Griggs had a similar experience. The center told her she would not have to deal too closely with abortions:

When I was interviewed, the doctor asked me if I had anything against abortions. I told him that I had never dealt with them and didn’t know very much about them. He said, “Well, you won’t have to work with them very much. We only do a few of them.” I had no idea just how many he was really doing and just how involved I was going to have to get.

Soon after Griggs was hired, she became troubled by a girl who seemed to be using abortion for birth control:

The second week I was there, a 17-year-old girl came in for her third abortion. She was using it for birth control. I asked her, “How come you don’t use something else?” She said she didn’t like the other forms of birth control. She thought this was so convenient and it was free. Medicaid paid for it. She didn’t have to pay one penny.

Nobody else said anything to her. They didn’t try to convince her to change her mind. She was on Medicaid and it was all getting paid for. It was at that point I realized just what was really going on.

Griggs talked about how facility workers were forbidden from talking to patients about abortion alternatives, or even the details of the procedure they were about to undergo:

There was a public health center in a town not far from Denver and they sent a lot of girls to us. They told us they did all the counseling. We weren’t allowed to counsel them or even ask them about birth control. We couldn’t even tell them what could happen during the abortion. Nothing.

If we tried to discuss alternatives, we would get in trouble with the doctor because then the health center would threaten to send their business elsewhere. All we did was find out how far along they were, tell them when they were going to be finished, get their money, do the abortion, and send them home.

It turned out that two-thirds of the doctor’s practice was providing abortions. He had lied to her at the job interview. They used suction up until 12 to 14 weeks, Griggs says:

That’s just a big metal suction apparatus that’s inserted into the uterus and poked around until the fetus is all sucked out. After about 12 weeks the fetus would be too big. That’s when it got really messy.

In later abortions, done by D&E, the baby was dismembered:

In another type, we would dilate the cervix as big as we needed to, then go in with something like spaghetti tongs with an open spoon at one end. They would just grab parts of the baby and pull them off. The baby would bleed to death. They would get an arm or a leg and the nurse would have to count everything that came out to make sure they got it all. It was horrible.

These are the abortions that pro-lifers just banned in Kansas.

We could do abortions in the office up to 16 weeks along, and we could do them in the hospital up to 22 weeks. But the doctor had his own sonogram machine, and if a baby was over 22 weeks, he would just write down 22 weeks and do the abortion anyway.

If we got a “screamer” in the office the doctor would just go nuts. He’d say, “Get her out of here. Get her in the back room.” ….

The clinic workers were hardened to the plight of the unborn babies to the point where they laughed at sonogram pictures:

I remember one time, we did a girl that was 12 weeks along, and as little as that baby was, you could see on the sonogram it was sucking its thumb. Twenty minutes later it was in a bottle of formaldehyde all sucked up. We showed the girl the picture and we all laughed. We all got a kick out of it…

It is truly heinous to laugh about a baby that has just been killed, and to mock the ultrasound pictures that show the child’s humanity. The thought of center workers and the dead baby’s mother laughing about the ultrasound is enough to make one shudder. There is true evil in these abortion facilities.

We got a lady in that was 18 weeks along. We saved her until the very end of the day because she was so big. We knew she would bleed a lot and holler a lot – that it would just be a big mess and take a lot of time and effort. So, I had to go in and help one of the doctors, Lanny.

Sometimes you have to hold the top of the uterus so the doctor can know that he’s getting to the back and getting it all. I could feel him in there scraping and pulling. She was bleeding and hollering… and arms were coming out, then the head. It was just horrible.

When Griggs and another facility worker placed the aborted baby in formaldehyde, the horror of their job began to sink in:

There was an LPN working with me that Saturday and we were trying to get the mess cleaned up. There was a big bucket at the end of the table to catch stuff. We had to take all the contents of that bucket, the fetus, and put it in formaldehyde. We couldn’t find a jar big enough so we ended up having to put it in different jars and label it.

The LPN ended up going into the bathroom and vomiting. I was standing there at the sink, crying my heart out. I said, “Lanny, my God, are we going to hell?” He was standing there sweating and shaking and said, “Well, if we are, honey, I’ll be there first waiting on you.”

It is unclear why this particular abortion hit the clinic workers so hard. Perhaps it was the pain of the mother that brought their repressed feelings to the fore. Or perhaps the LPN’s emotional reaction freed Griggs and the abortionist to express their own buried emotions. For whatever reason, this was a particularly difficult abortion for Griggs to handle.

Shortly after this abortion, Griggs went to church and had a religious conversion. She came to see abortion as being wrong and quit her job. She says:

Right now there are people trying to decide when life begins. Abortion is destroying life – therefore it has to be murder. As long as the baby remains in the uterus it will be nourished. It will grow and be delivered at term. If you disrupt that in any way, knowingly and intentionally, you are killing a life.

Griggs is one of many abortion workers who have come out of the horror of the abortion industry. She was brave to share her story. The testimonies of former clinic workers reveal the horror of abortion to those who will never set foot in an abortion facility.

How many babies are born alive and left to die after botched abortions? The numbers will shock you
‘What could I do? I killed the baby,’ abortionist told nurse about baby born alive