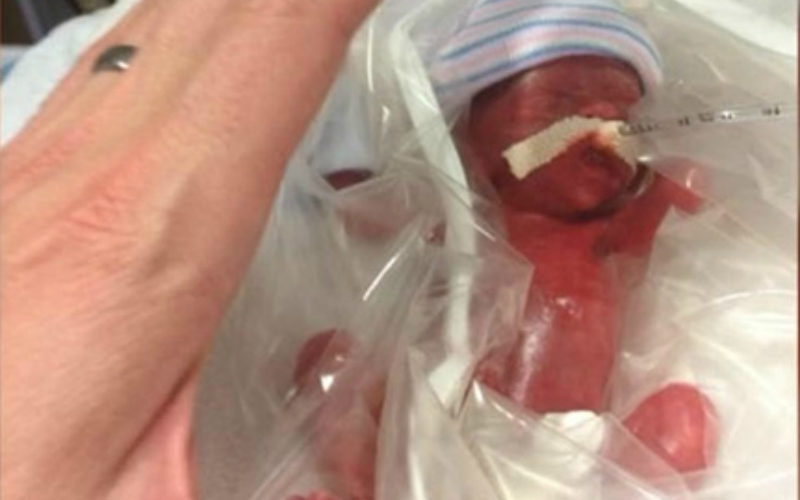 When a child is born 15 weeks early; when she weighs less than 13 ounces; when she can fit in the palm of your hand; and when Naomi Joy Bakker’s hands were the size of her dad’s thumbs, it’s easy to understand why some doctors told her parents “ Naomi’s chances of survival without health complications were less than one percent.” Or at all!

But in the less than five months she spent in the Renown Regional Medical Center Neonatal Intensive Care Unit Naomi has met so many milestones. “Naomi is healthy and ready to graduate from the NICU with few complications,” according to Fox 28 reporter Elizabeth Faugl.

That’s a long way from the moment they learned of Naomi’s situation before she was born. “We got on our knees, and we begged,” Mrs. Bakker told Faugl. “And we said we would take her however he gave it. If she was blind, or whatever, we just wanted our baby.”

On July 1 Joy and Michael Bakker’s little one was born at only 25 weeks gestation. “Her eyes were still sealed and her organs underdeveloped,” Faugl explained. “Doctors across the country said she had no chance, but she’s proven them wrong.”

“She’s one of the littlest babies around. They told us there was no hope for her,” said Angela Bakker. “The first time I held her was so scary. So frightening. She was so tiny.”

But her nurses told Faugl:

her parents always came in to hold her. Even though Naomi was fragile, the skin-to-skin contact was important. And most of all, Naomi always had a feisty spirit.

“Strong, from day one, you could tell she was a fighter and she had it in her,” says Carrie Archie, one of Naomi’s primary nurses.

“We just gave her what she needed, she did all the hard work,” adds Nichol Alvaraez, another one of Naomi’s primary nurses.

It’s made all the difference. Naomi will go home to meet her big brother, who has only been able to Facetime with her. He’s only two-years-old and cannot go to the NICU.

Last Thursday, the “baton” was handed off. Naomi is now home from the Reno, Nevada, hospital.

At the hand off, a local channel did a story on Naomi and the NICU. Something happened we never planned on happened. This little blog to update friends and family went a little extra crazy and more people are following Naomi’s story. To all you who have just started on this journey with us, we have this to say – Thanks for all the encouraging posts and messages. It’s hard to find the time to respond to each and every one – but we have read them. This journey is a work in progress and we never know from one day to the next where it will lead. We hope you find encouragement through this story as we update family and friends on what is going on – with a moment of reflection here and there.

Enjoy the ride. I hope it’s not nearly as “dramatic” as the first leg.