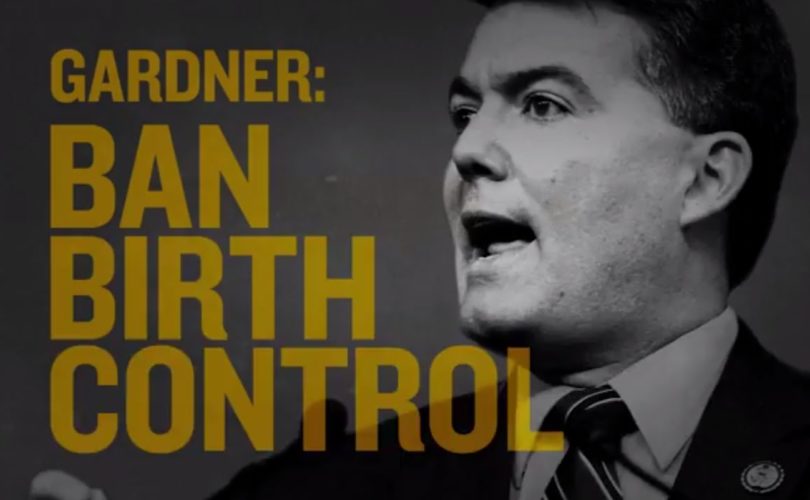 As his chances of re-election begin slipping away, Democratic Colorado Senator Mark Udall and a major part of the abortion lobby have issued a new allegation: If Cory Gardner is elected, Americans will lose access to condoms.

The new ad, funded by abortion lobby NARAL, is the latest attack on Gardner, as the Republican Congressman has pulled into a small but consistent lead with just days left until voters head to the polls.

According to the NARAL ad – which was heavily criticized by National Journal, Fact Check, and Politifact, among many other outlets — electing Cory Gardner to the U.S. Senate would lead to a shortfall of condoms. While the ad does not explicitly say Gardner's election would ban condoms, it sure as heck insinuated it.

This is why PolitiFact gave the ad a “Pants on Fire” rating:

The ad claims that “if Cory Gardner gets his way, you'd better stock up on condoms.”

The most obvious interpretation of this statement is that Gardner wants to ban condoms — something that’s based on an incorrect interpretation of the measures Gardner has supported in the past (and which he has since distanced himself from). Gardner says he doesn’t support banning condoms, and in any case, condoms would not be at issue under the personhood measure he once supported.

We rate this claim Pants on Fire!

But this particular condom conundrum is not the only reason the ad is atrocious.

The radio version says that the election of Cory Gardner would ban birth control, which would leave people who want the fun of sexual intercourse (what I'm told is fun, anyway — I'm rather inexperienced on such matters) without the results of a child reliant on condoms. At that point, the listener is told, men would simply run out of condoms because of how many couples would want to use them.

I have a question for NARAL: Since when can a single Senator ban birth control, even if he wanted to?
The answer: One cannot. That would require 60 votes in the Senate, which would mean all Republicans as many as a dozen Democrats.

Even if this ad reflected Gardner's actual position instead of a bizarre distortion, that just ain't going to happen.

Perhaps most egregiously, the ad pretends that banning abortifacients — which is what a personhood amendment would do — would also ban contraceptives. This is a falsehood that has long been spread, even though a contraceptive prevents fertilization of an egg, while an abortifacient ends the life of an unborn person.

Unfortunately, PolitiFact, Fact Check, and NJ all fell for the “contraceptive/abortifacient” bait-and-switch, with Fact Check going so far as to say that “a pregnancy has been [medically] defined as beginning at implantation.” But that's a post for another day.