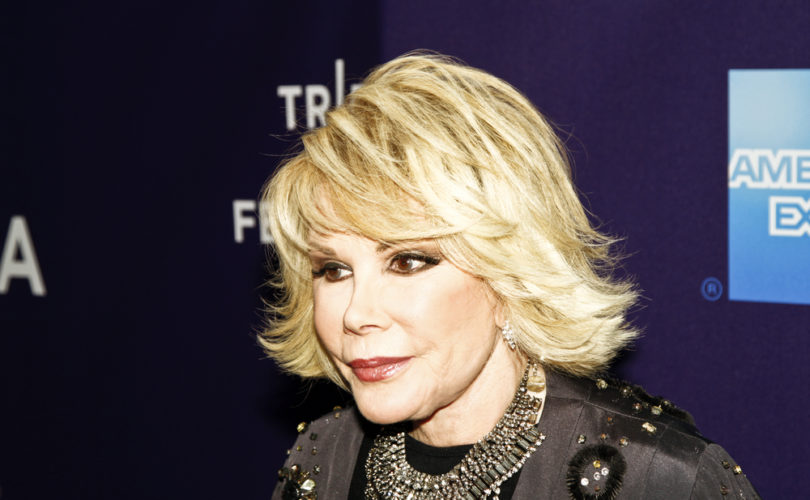 Comedienne Joan Rivers remains in critical condition today after going into respiratory and cardiac arrest August 29 during what has been described as a“routine throat procedure,” a “minor procedure,” and “outpatient surgery.”

We pray the 81-year-old is restored to health, although there are concerns “the part of the brain that controls motor skills may have been compromised, leaving her as either a vegetable or in a wheelchair,” according to New York Daily News, in which case Rivers allegedly “would not want to live unless she could enjoy ‘a full and active life’” because she “would not want to be a burden on anyone” – a topic for another post.

What connects this to the abortion issue is what NBC News’ chief medical editor, Dr. Nancy Snyderman, said we could learn from this tragedy on The Today Show on August 29:

The really important thing here is that every time you think you’re going to have a procedure, no matter how minor, you have to constantly remind yourself that although these things are rare, they can happen. And one more thing I should say, make sure your doctor has admitting privileges to the local hospital, because in this case it may well have saved Joan Rivers’ life.”

This is logical and sound medical advice, right? Noncontroversial… except when it comes to abortion, when common sense is thrown out the window.

The issue of abortionists having admitting privileges at nearby hospitals has become huge in recent years, and even recent days, as several states have moved to enact such laws. Abortion proponents always oppose these as an “undue burden,” “medically unnecessary,” and even an “assault” on women – a backdoor attempt by pro-lifers to shut down clinics.

In fact, for many, including myself, this is indeed a backdoor attempt to shut down clinics.

But so what. This should be separated from the fact that such laws do indeed protect women’s health and safety. Who wants to go to a doctor who can’t get hospital admitting privileges? And why should abortion clinics be allowed to operate as substandard medical facilities simply to protect abortion? Abortion most certainly isn’t a benign procedure. Since abortion was legalized in 1973, at least 411 mothers (CDC Table 25 – as of 2009, the latest figures available) have died due to abortions at legal clinics. That’s just deaths.

Only hours ago a federal judge issued a temporary restraining order to block enforcement of Louisiana’s admitting privileges law, due to take effect today.

And on Friday a federal judge blocked Texas from enforcing a law forcing abortion clinics to adhere to the same standards as ambulatory surgical treatment centers, which is related since some of these regulations ensure halls and doorways are wide enough to fit gurneys and wheelchairs.

These are just two examples of  the”abortion distortion” we see in U.S. courts, of which Joan Rivers’ tragedy reminds us. Such irrational legal decisions kill not just children but their mothers.