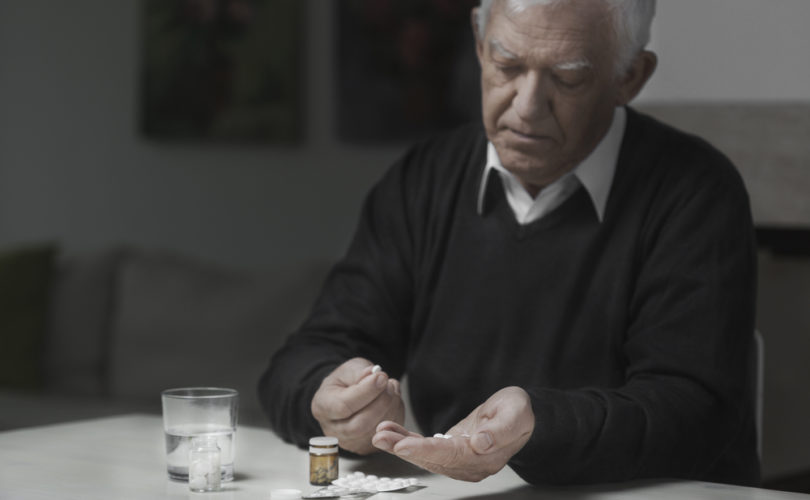 November 18, 2015 (NationalReview) — There is a logic to the euthanasia movement. Once becoming dead is transformed into a fundamental civil right, there is almost no limit to the killing/suicide license thereby created.

Case in point. The Voluntary Euthanasia Society in the Netherlands believes the wide-open killing license granted doctors–including the mentally ill, the elderly tired of life, the disabled, the grieving, the chronically ill, the terminally ill–is just not enough.

Now, they want suicide pills made available to the elderly. From the DutchNews.nl story:

The Dutch voluntary euthanasia society is relaunching its campaign to have a pill made available to elderly people who wish to end their lives, the NRC says on Friday. The idea for such a pill was first launched at the beginning of the 1990s by senior judge and euthanasia campaigner Huib Drion and became known as ‘Drion’s pill’.

He said the pill should be issued free of charge to everyone over the age of 70 but his initiative floundered on medical, ethical and legal grounds. Now the NVVE is having a new attempt and this time says the pills should only be issued by pharmacists or family doctors. ‘This is important to make sure the drugs cannot be used for suicide, abuse or murder,’ the organisation said.

“The drugs cannot be used for suicide.” What? That’s their purpose!

It is amazing how death-obsessed these people. Doctors are already permitted to teach their patients how to commit suicide if they don’t qualify legally for euthanasia (a shrinking list). But even that is not enough.

When euthanasia began in the Netherlands, those who said it would lead to killing the mentally ill and conjoined medicalized killing with organ harvesting (such as moi) were called alarmist.

Yet, it all came to pass. I have little doubt that at some point, this will too.