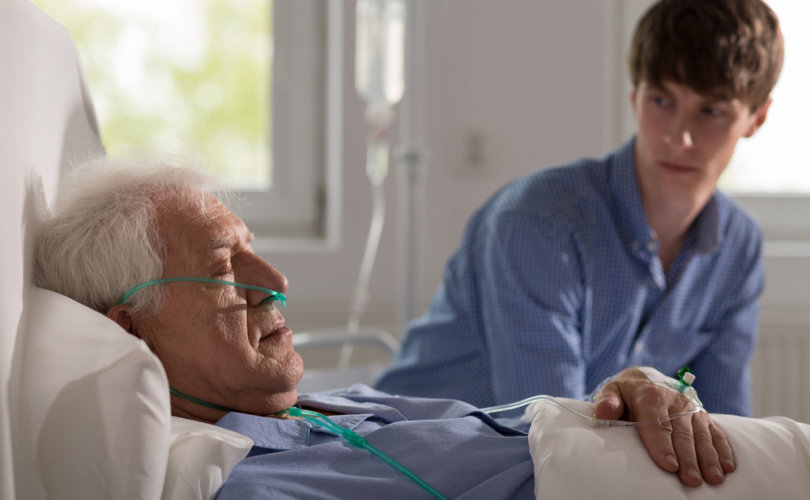 October 24, 2016 (National Review) — If there is any aspect of the culture of death not supported and promoted by the New York Times, I haven’t seen it.

It is worth noting here that Compassion and Choices, formerly known more honestly as the Hemlock Society, promotes VSED even for healthy elderly people who want to die.

Euthanasia death zealots have pushed various methods of becoming dead for a long time, of course. But it is shocking that a columnist on elderly issues for the nation’s most prominent newspaper would join so enthusiastically in under the pretext of describing a VSED conference she attended. From, “The VSED Exit: A Way to Speed Up Dying Without Asking Permission:”

Patients don’t need a terminal diagnosis, and they don’t have to prove mental capacity. They do need resolve. “It’s for strong­willed, independent people with very supportive families,” said Dr. Timothy Quill, a veteran palliative care physician at the University of Rochester Medical Center.

This is suicide by starvation, and it is agonizing. That is why it usually requires a doctor to provide palliation to make the process bearable. But that is assisting suicide just as much as supplying poison pills.

As I have written previously, death zealots even want nursing homes required to starve their patients to death who become incompetent if so instructed in an advance directive:

The question grows much murkier for patients with dementia or mental illness who have specified VSED under certain circumstances through advance directives. Several states, including Wisconsin and New York, forbid health care surrogates to stop food and fluids. (Oregon legislators, on the other hand, are considering drafting a bill to allow surrogates to withhold nutrition.)

Imagine the deleterious impact on the healthcare sector if those who wish to become nurses and caregivers knew they could be forced to starve their patients to death, even when they willingly eat and drink.

The entire article fails to present one voice arguing against VSED, but sure boosts it:

A 2003 study of hospice nurses in Oregon who had cared for VSED patients. Rating their deaths on a scale from 0 to 9 (a very good death), the nurses assigned a median score of 8.

Nearly all of the patients died within 15 days. The slower pace of death from fasting, compared with ingesting barbiturates, gives people time to say goodbye and, for the first few days, to change their minds. Several conference speakers described patients who had fasted and stopped a few times before continuing until death

Geriatric depression is a terrible problem in our society. The last thing depressed oldsters need is a writer on aging issues pushing self-starvation as a splendid way out.