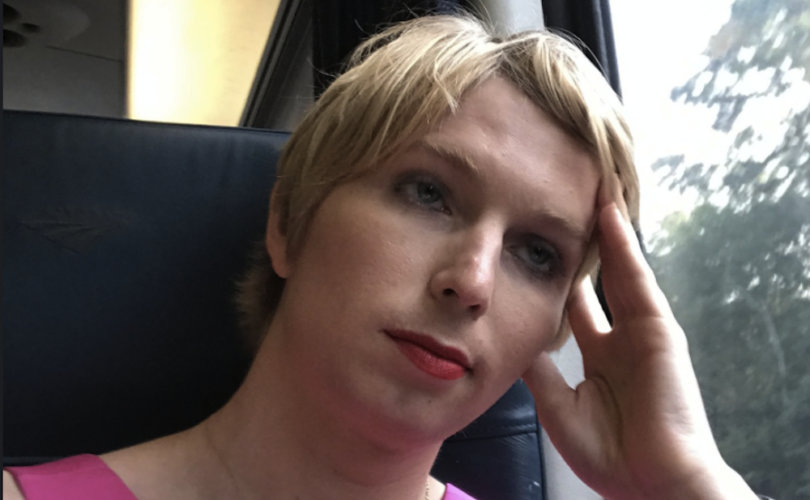 September 26, 2017 (LifeSiteNews) – Bradley Manning, aka, Chelsea Manning, was turned away at the New York-Quebec border by Canadian authorities.

A letter issued to Manning citing Canada’s Immigration and Refugee Protection Act states that Manning “is a person who is not authorized to enter Canada … and is inadmissible on grounds of serious criminality for having been convicted of an offense outside Canada that, if committed in Canada, would constitute an offence under an Act of Parliament punishable by a maximum term of imprisonment of at least 10 years.”

The letter also noted that Manning was convicted of violating the United States Espionage Act, which according to Canada’s criminal code is considered treason.

Manning posted a copy of the letter in a Tweet, adding, “So I guess Canada has permanently banned me?”

so, i guess canada has permanently banned me ? ✋�������� @CitImmCanada denied entry b/c of convictions similar to “treason” offense ������ pic.twitter.com/xp0JOEEOGd

Commutation has its limitations

In January, former President Barack Obama commuted Manning’s prison sentence after he had served only a fraction of its 35-year term. Manning had been convicted for transmitting 750,000 secret military records and State Department cables to WikiLeaks in 2010 while working as a low level intelligence analyst in Baghdad, placing untold innocent people’s lives in danger.

Manning’s rejection by Canada came less than two weeks after Harvard University rescinded his ‘Visiting Fellow’ invitation in response to stinging public denunciations.  Current and former CIA directors pulled out of commitments to the Ivy League school, citing matters of conscience and allegiance to those with whom they are proud to serve.

Former CIA Deputy Director Michael Morell resigned his position as a senior fellow at the Ivy League school, stating, “I cannot be part of an organization – The Kennedy School – that honors a convicted felon and leaker of classified information.”

CIA Director Mike Pompeo canceled an appearance at the school, saying, “Ms. Manning betrayed her country and was found guilty of 17 serious crimes for leaking classified information to WikiLeaks,” and “WikiLeaks is an enemy of the United States, akin to a hostile foreign intelligence service.”