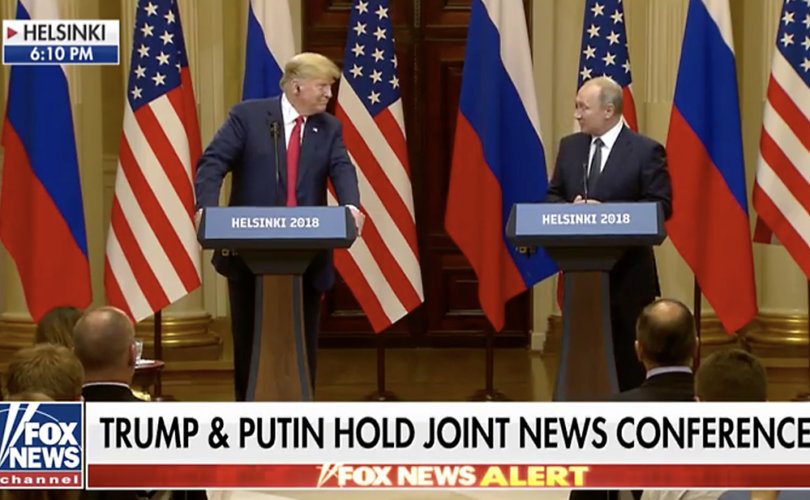 For a refreshing, totally alternative viewpoint:

July 18, 2018 (Breitbart) – President Donald Trump proved to Russian President Vladimir Putin on Monday that he is nobody’s puppet — not Putin’s, not the Deep State’s, and not the establishment media’s. Like the moral strength he showed in Charlottesville, VA, last year, Helsinki should be remembered as one of Trump’s finest moments.

What the media wanted was to emotionally blackmail Trump into creating an international scene, a YouTube moment with Putin, where the president would violate every diplomatic norm to publicly shame and berate the Russian president.

Why do you think Dirty Cop Mueller dropped his kangaroo indictment (more on this below) just a few days before the Putin summit? It was all coordinated and staged, it was the behavior of spoiled children desperate to get their way.

Nevertheless, what really happened is this: Trump showed the gangster Putin that he is his own man, that he cannot be bullied by America’s corrupt political and media establishment into behaving in a certain way, that he is willing to take those flaming arrows to do what he thinks is right, which, in this case, is to never forget the lessons of Iraq.

And Monday, in Helsinki, while knowing full well the hell that would be unleashed on the other side, President Trump did the right thing in pursuit of Peace. This is not me arguing he was perfect, that he could not have been more articulate, but that he did the right thing is beyond dispute.

For two years the media and Never Trump assured and reassured me that Trump was a shallow and feckless man interested only in one thing: adulation and praise. But on Monday in Helsinki, just as he did in Charlottesville, I saw Trump choose, at great personal cost, to do the moral and patriotic thing over what would have earned him that adulation and praise.

The truth about Trump, the border, and ‘Kidtrina’