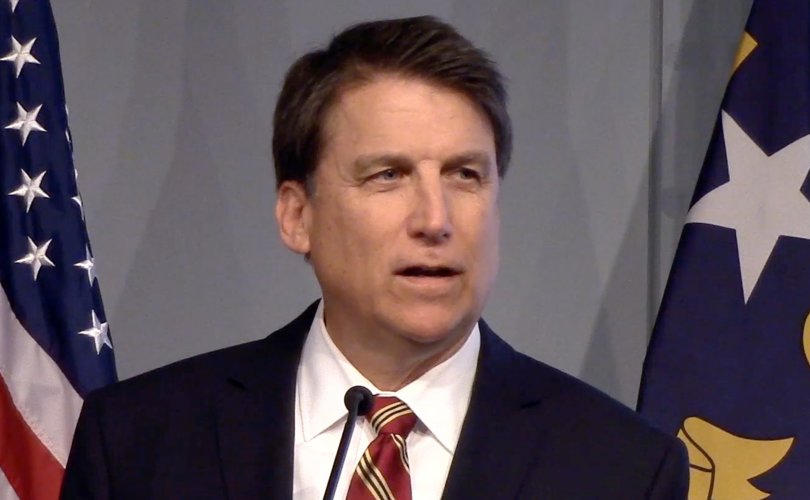 In the face of the worst storm of his political career, Gov. Pat McCrory is standing firm.

April 15, 2016 (FRC) — Very few people can imagine the pressure Governor Pat McCrory (R-N.C.) has been under since March 23. With one signature, he knew a vicious, distorted, smear campaign awaited — not just him, but the entire state. Still, in the face of the worst storm of his political career, McCrory stood firm, knowing that what he did was right for North Carolina in the long run. There's never a wrong time to give businesses more freedom to operate their own way. And despite what the Left, Big Business bullies, and cultural elites may say, that's exactly what H.B. 2 has done. Yesterday, after a three-week pounding from Bruce Springsteen to Facebook, McCrory blinked — issuing an executive order to clarify the North Carolina law from the politically-motivated attacks.

At first, conservatives worried the bill might be “Penced,” a reference to Indiana Governor Mike Pence (R-Ind.), who surrendered to the demands of LGBT activists and watered down his state's religious liberty law. “I have come to the conclusion that there is a great deal of misinformation, misinterpretation, confusion, a lot of passion, and frankly, selective outrage and hypocrisy, especially against the great state of North Carolina,” McCrory said in a video message. “I am taking action to protect the privacy and equality of all North Carolinans.”

While we don't think Governor McCrory needed to provide any additional clarity, his executive order doesn't change the law he just signed to stop local government from forcing people to violate their beliefs about sexuality. That much was confirmed when members of the ACLU and LGBT communities lashed out, insisting that the document was “a poor effort to save face.” Instead, liberals used the moment to call for a full repeal. Obviously, their response shows that the Left has no interest in a live-and-let-live policy and couldn't care less about the common sense privacy concerns of North Carolina families — even when it comes to the question of letting grown men use the girls' restroom. Everyone deserves human dignity and respect, but that doesn't mean the government should force businesses to adopt its own twisted views on marriage or gender identity. We join our allies in the state — and Christians all across America — in calling on Governor McCrory to continue to protect women and children by defending H.B. 2.