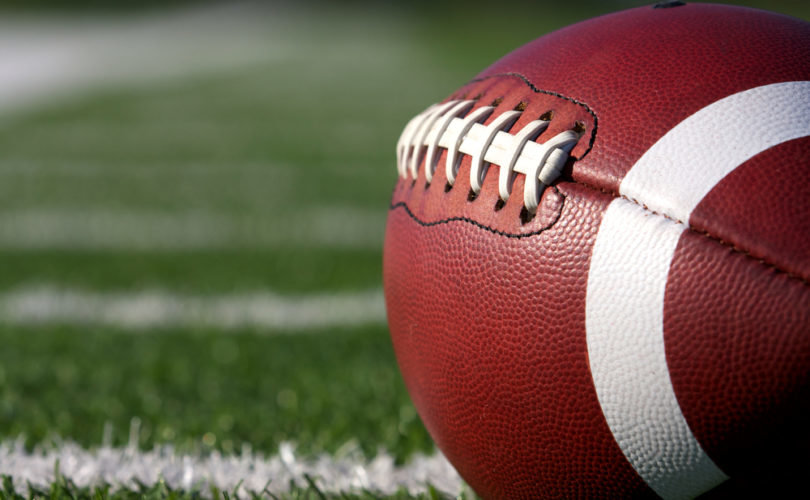 I'm not a fan of the New York Giants. They ruined a perfect season for the New England Patriots in 2008, and stopped the Pats again in the 2012 Super Bowl. And I was made aware this morning that the team hired the Giants player who made their 2008 victory possible, David Tyree, as their new Director of Player Development.

So yeah. Not exactly a fan of the Giants. But after the other thing I read this morning, that might have to change.

First, it turns out that Tyree is a strong Christian, and his faith drives his belief that marriage is between a man and a woman. CBS reports:

“This will be the beginning of our country sliding toward, it's a strong word, but anarchy,” Tyree told the anti-gay group, the National Organization for Marriage, three years ago when talking about marriage equality. “How can marriage be marriage for thousands of years and now all the sudden because a minority, an influential minority, has a push or agenda … and totally reshapes something that was not founded in our country.”

“I don't agree with [gay marriage] because God doesn't agree with it. As a Christian, I don't agree. Society may be changing but God is not,” Tyree said. “This is not personal. I could still be in a locker room with a gay man and still love him as a teammate. I can be tolerant, but the problem is people aren't tolerant of the views people like me have. If you don't agree with that lifestyle, you're a bigot. I'm not a bigot. I have different viewpoints.”

Second, the Giants are standing with Tyree, rather than pulling a Mozilla and throwing him out on his rear. From the same link as above, the Giants' statement: “He was expressing his personal view, and that is not the view of the Giants organization.”

Exactly. He was hired to do a job, not be a spokesperson on gay-related issues.

Of course, the pressure has just started for the Giants. The CBS article above-linked article calls Tyree's comments “incendiary” and says Tyree opposes “marriage equality.” It also editorializes and says that his tweet noting “there are many former homosexual men & women in this country & no scientific data to support the claim of being born gay” equates to beliefs about the idea “that gay people have the ability to choose whether they're gay and that gay aversion therapy can somehow 'pray the gay away.'”

Never mind that Tyree never mentioned specifics about his beliefs on this aspect of the issue.

Naturally, Human Rights Campaign (HRC) had to throw its two cents in:

“His misinformed and dangerous statements put his judgment into question, on and off the field,” said Fred Sainz, a spokesman for the HRC. “Why would the New York Giants organization want a guy like this working for them?”

Why, indeed? According to the Giants' coach, Tyree is “the best guy for the job.”

“Player engagement has become extremely important in any franchise,” Coughlin said. “It is the working relationship with the players to aid them in their continuing education, their development as young men, the opportunities in the business world and in networking in the city that they happen to be playing in. It is there to help instruct them, make them aware of the issues and the problems that exist out in the community and the world to try to keep them focused on their job and not fall into trouble.

“[Tyree's] ability to function on many, many levels is extremely attractive. Anyone who's ever spent time with him or heard him speak publicly knows the quality of his work. We thought he was the best guy for the job.”

The faux controversy being created by CBS and HRC is aptly timed, in light of Super Bowl-winning former coach Tony Dungy's comments that NFL draft pick Michael Sam — who would become the first openly gay NFL player if he makes the cut this fall — should not have been drafted: “not because I don’t believe Michael Sam should have a chance to play,” he said, “but I wouldn’t want to deal with all of it.”

Dungy's comments have caused an uproar among sports commentators, but at least two commentators have kept their heads. First, Stephen Smith:

Me personally, I’m like, live and let live. Do what you do. … I am a proponent of most of the causes the gay community has fought for. And I think that it’s wrong how they’ve been prejudiced against. But having said all that, I think it’s important to recognize that that doesn’t mean people have a right to be comfortable with you.

And writing for Mediaite, Joe Concha pointed out that Michael Sam would bring about a media storm — and it would be Sam's fault. Concha noted that Sam nearly did a reality show about himself, after saying he only wanted to play football and not be noted for his sexuality. Concha compared outrage against Dungy to the lack of outrage among commentators who regularly criticized former quarterback Tim Tebow for the media that followed him.

Will the Giants continue to stand by Tyree? Let's hope so. It would be a good reminder to the HRC-style shriekers that there's more to life than sexual orientation.