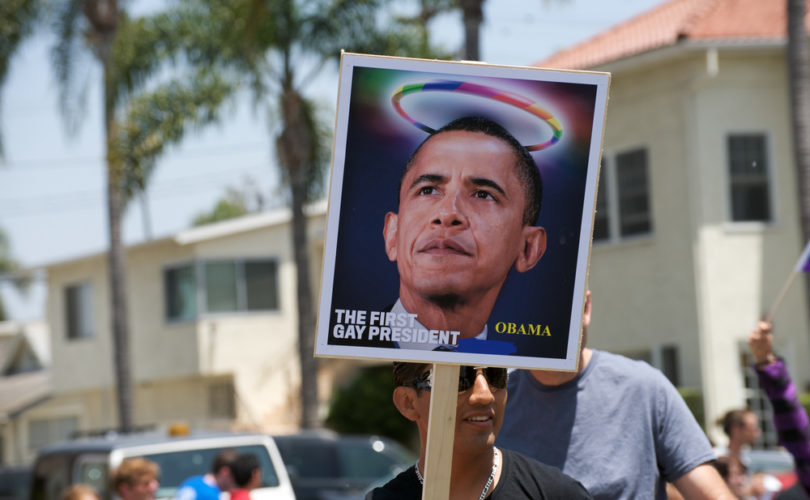 As the death toll at the nation's VA hospitals continues to mount, the Obama administration has shown that it is not completely incapable of changing the insides of those facilities. According to an e-mail from a dentist in the scandal-plagued department, the hospitals could not see veteran patients on time or effectively care for them, but they managed to promote gay, bisexual, and transgender political issues last month.

I am a dentist at the VA [U.S. Department of Veteran Affairs] in (name withheld). Yesterday as I was leaving work, I noticed a poster display inside the building that read “Lesbian Gay Bisexual Transgender Pride Month. Diversity is at the heart of America's strength.”

As a Catholic, I am deeply offended at this. A government workplace condoning the homosexual agenda! What can be done about this? I should not be forced to look at this everyday as I come to work! I have attached a photo of the offending poster display.

Full disclosure: I owe much of my college education to a scholarship I won through the VFW “Voice of Democracy” speech contest. I met good men and women there who became lifelong friends, or whom I remember fondly to this day. But I've always believed a nation cannot do enough for the men and women who put their lives on the line to protect its citizens.

Barack Obama, on the other hand, seems to have a particular antipathy for veterans – snubbing the VFW convention, gratuitously locking veterans out of national monuments during the government shutdown, threatening to hold up veterans’ pensions, allowing Senate Democrats to hold military pay hostage to pass the DREAM Act, ignoring the vets' expert advice in his drive to repeal the military's “Don't Ask, Don't Tell” policy, forcing gay propaganda on soldiers in the most dangerous regions of Afghanistan, even giving a “shout out” to someone in the audience of a press conference before addressing the Ft. Hood massacre.

…And he let them die for years while he looked the other way. But, as his opposition to the Born Alive Infant Protection Act proved, Obama is always ready to look the other way when the innocent are dying.