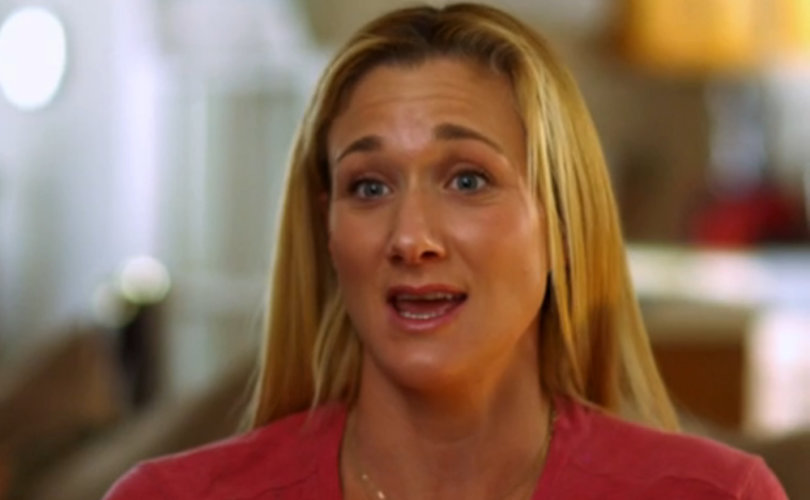 August 9, 2016 (LifeSiteNews) — Kerri Walsh Jennings’ candid love for being a mom had at least one liberal rolling her eyes and questioning why NBC dared to air its interview with the U.S. Olympic beach volleyball gold medalist.

Specifically, the part where Walsh Jennings says: “I was born to have babies and play volleyball.”

That led to Paula Nixon wondering on Twitter “what is @nbc doing to us?” and adding: “And now a package about Kerri Walsh Jennings: ‘I was born to have babies.’ Is Donald Trump running the network now? Get it together.”

The 37-year-old Catholic, who has three kids with husband, U.S. beach volleyball player Casey Jennings, won kudos for her toughness in 2012 when she competed while pregnant and won a gold.

She told reporters: “I’d love to win a fourth gold medal. I’d love to have a fourth baby.”

“Before I had more kids, I was like, this feels trivial. I’d been playing for so long, and I was like I need balance. All my eggs are in this one basket and it’s very self-centered and self-focused,” Walsh Jennings told NBC’s Joe Fryer.

Her children “gave me that perspective and balance I thought I was missing,” she continued. “It took my game and my desire and my passion for life to the next level. I am hugely indebted to my children.”

But arguably, Walsh Jennings had as many, if not more, supporters than detractors, with Heartbeat International’s laudatory tweet that “Gold medalist Kerri Walsh Jennings knows the value of children” and A Woman’s Concern approving that she “gets it: children do not keep us from pursuing our dreams!”

Hannah Heinz tweeted: “Kerri Walsh-Jennings is 37 years old with 3 Olympic gold medals. 3 kids, and a 6 pack. What a boss,” and Tyler Nunez posted admiring: “‘I was born to have babies and play volleyball.’ – Kerri Walsh Jennings with the most hardcore quote I've ever heard.”

The beach volleyball player noted on her profile that “the balancing act of motherhood and a career, and being a wife, is something that I don't think I'll ever perfect, but I love the challenge of it.”