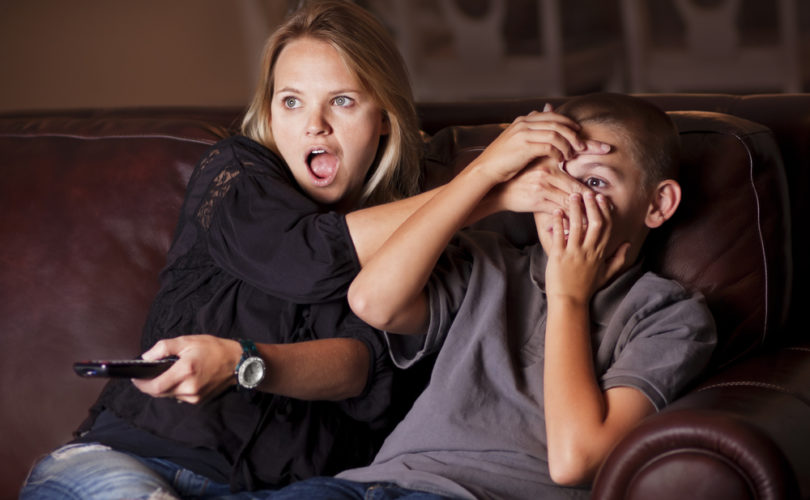 I wondered as I did Banner Project near an adult “fun” shop. As parents leaned out of their windows to yell at us, I wanted to point across the street. What about that? I wanted to ask. What about those huge pictures that your children get to look at on their way to the mall? Oh, and speaking of the mall, what about the huge posters outside of la Senza, Victoria’s Secret and all of those stores? It’s hard to miss those posters, and do you really want your little girls, your young impressionable boys, learning the ways of the world so young? Where are all the angry parents?

And if we’re going to talk about graphic, there’s a new horror movie coming out. Or maybe it’s already out, I wouldn’t know. All I know is that in the mall there’s a huge poster of a corpse. Or is it a zombie? And I think in the background there’s a thing. A thing with its eyeballs popping out and it’s brains sliding out of its nose. Speaking of monsters, it really isn’t that long ago that there were body parts, blood and gore plastered everywhere. I don’t think your children could have stepped outside their front doors without images of death and hideous monsters, ghosts and gravestones assaulting their eyes. And I asked myself, where are all the angry parents?

Most importantly, let’s not forget what our Liberal government is trying to do right now. If we ever needed angry parents defending their children’s innocence, we need them now, as our premier is about to implement a new “sex education” curriculum. She seems unwilling to show this plan in its entirety to the public, and the fact that the seven child porn charges laid against Benjamin Levin, who closely worked with the premier and very much pushed the “sex education” agenda, is being ignored by the media. The innocence of children is very clearly threatened as the new program teaches children younger than my eleven year old little sister explicit details of sex that they shouldn’t have to know for years, if ever. To be perfectly honest, as an eighteen year old, I’ve seen some of the reviews for this plan and I still don’t know what some of the things are, and not the things they're planning to teach high-schoolers. We’re talking about children here.

So I’ve come to doubt some of the angry responses we’ve received while doing pro-life work. I’ve come to ask the question, “Are you truly trying to protect your children’s innocence? Or are you just trying to protect yourselves from the truth?” As the postcards that cause so much anger are getting distributed, tucked amidst the other pieces of mail, I wonder how many children actually accidentally come across them. All I can be sure of is that while with the postcards it's hit and miss if children pick them up, in the new sex-ed program, it won’t be hit and miss. Once the Liberals have your children, they will make sure that they don’t miss a word.

Please, Ontario, where are all the angry parents?