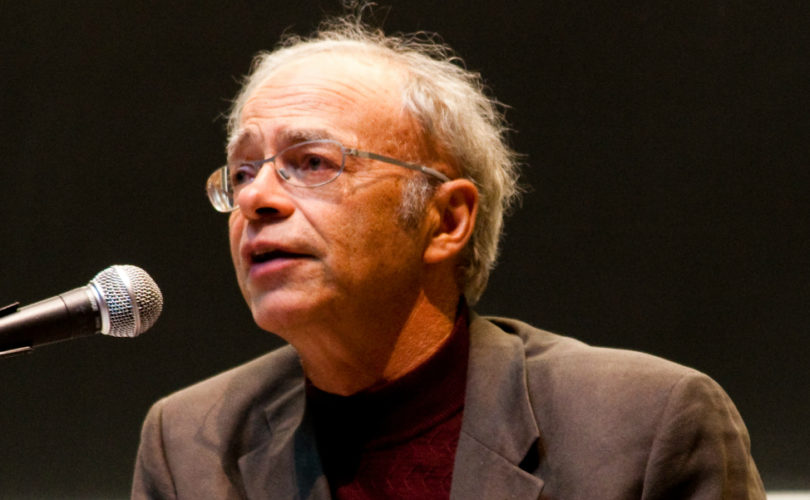 April 8, 2015 (NationalReview.com) — In a world in which someone who makes a politically incorrect utterance can be ruined, Peter Singer should be anathema, given his truly awful beliefs.

Instead, he is looked to as a respected ethicist, for example, in an article in the Wall Street Journal about his book urging that we give 1/3 of our incomes to charity.

But the writer left out so much about what makes Singer’s utilitarian values so rotten–and often anti-human. Consider:

• Singer supports personhood theory and infanticide: Singer claims that personhood should replace humanhood as the measure of highest value. In this view, individuals who are not self-aware are not “persons,” and thus have lower value—to the point that so-called human non persons can be killed. In this regard, Singer made an explicit moral equivalency between some people and mackerel in Rethinking Life and Death, writing “Since neither a newborn infant nor a fish is a person the wrongness of killing such beings is not as great as the wrongness of killing a person.”

• Singer supports using the disabled in medical experiments: For example, when asked by Psychology Today about the benefits that chimps provided in developing the hepatitis vaccine, Singer said that disabled humans should be used in such research instead.

• Singer is pro-medical discrimination: Singer supports health care rationing, writing in the July 15, 2009, New York Times, “The debate over health care reform in the United States should start from the premise that some form of health care rationing is both inescapable and desirable.” Singer prefers the “Quality Adjusted Life Year” (QALY) approach that has been used for years by the United Kingdom’s socialized National Health Service. QALYs give greater value to the lives of the able-bodied and young than to people with disabilities and the elderly (which are “adjusted” down based on low “quality”) when determining whether the cost of a treatment is worth the price.

• Singer has defended bestiality: Singer positively reviewed a book celebrating the history of bestiality, and concluded that the proscription against sex with animals was merely a vestigial “taboo” from a more sexually repressed era. Indeed, he extolled a woman for being unconcerned at the prospect of forced sexual intercourse with an orangutan, on the basis that “We are great apes. This does not make sex across the species barrier normal, or natural, whatever those much-misused words may mean, but it does imply that it ceases to be an offence to our status and dignity as human beings.”

• Singer Co-Founded The Great Ape Project (GAP): The GAP was the brainchild of Peter Singer and Italian philosopher Paola Cavalieri, and seeks “equality beyond humanity.” Realizing that obtaining equal moral consideration for all animals will be a multi-generational project, Singer and Cavalieri decided to “break the species barrier” by obtaining legal recognition that all great apes—us, gorillas, chimpanzees, orangutans, and bonobos—are a “community of equals.”

A Peter Singer world would be profoundly immoral. It would be a society in which babies that did not suit the interests of their parents could be killed.

It would be an era in which the most vulnerable human beings—living fetuses, unwanted infants, people with profound cognitive impairments—could be used in medical experiments of the kind decried by the Nuremberg Code and/or be subjected to death by organ harvesting.

It would be a world in which universal human rights would have been discarded and replaced by a society in which our rights were subject to revocation based on our quality of life.

And yet, despite these and other awful consequences, he’s the most celebrated bioethicist and moral philosopher of our times.

Here’s the hard truth: The problem isn’t Singer. The real source of the moral collapse comes because too many of us are unwilling or unable to defend the intrinsic dignity and importance of human life.