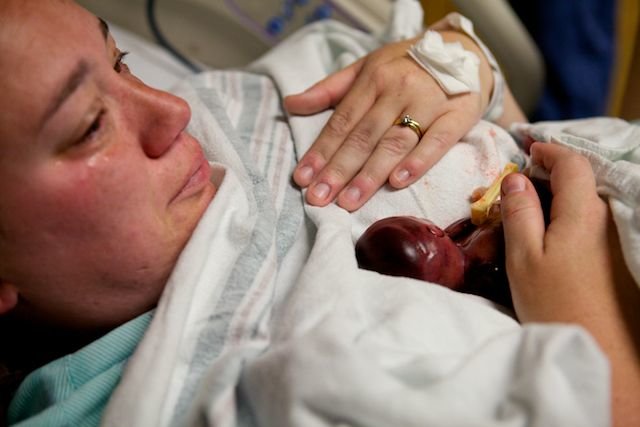 (LiveActionNews) – It took a long time for Michayla, age seven, to deal with the loss of her baby brother, Walter. Michayla still proudly speaks of him, telling strangers that she has two sisters here, and a baby brother in heaven.

At 19 weeks gestation, Michayla’s mother, Lexi Fretz, miscarried Walter. At the time, Fretz, her husband, Joshua, and their two daughters were hundreds of miles away from home. They had traveled for a wedding where they were both guests, as well as photographers. Then the unthinkable happened – Fretz went into labor.

Baby Walter may have only lived outside the womb for a few moments, but his life has had a lasting impact. He saved others from abortion, and helped pro-abortion individuals see the preborn as human beings deserving of life. But Walter’s family had to move on with their lives without him, starting with the long trip home.

“Having to travel 600 miles home having just given birth, and dealing with traveling kids and postpartum me wasn’t fun,” Fretz said. “And then when I got home, I had lots of support from family and friends, and the community as they found out, too – church and everyone else. We kept on living and trucking along, and doing what we had to do.”

A picture of Walter on Fretz’s Facebook page quickly spread, and she began to pen Walter’s story and the impact of his short life. Today, well over a million people have seen Walter’s photos.

“It still blows my mind,” Fretz said. “I never expected that when I put those pictures up, or the story up – just seeing how God would use our pain. So many women don’t get the answer to why. Everyone wants to know, Why, God? Why did you do this? Now I know why. I have seen Walter’s purpose. That has helped my husband and I, and our healing.”

People around the world continue to tell the Fretz family that they ended up choosing life for their babies because of Walter. One note that stands out to Lexi is from a woman not too far from home.

“There was a lady in a town next to ours who was sitting in an abortion clinic with her daughter,” Fretz said. “She was ready to go through with it. She said the whole time, she was thinking she shouldn’t be doing this. She went online while she was sitting there, and she saw Walter, and she started to cry – and they got up and left.”

While Walter’s photos made their way across the globe, Fretz discovered she was expecting another child.  She was thrilled, but the pregnancy had some frightful moments. Fretz was diagnosed with an incompetent cervix, which can lead to premature labor. She had surgery at 13 weeks gestation to place a permanent band around her cervix, and it was a success.

“They were thrilled to find out about Mia,” Fretz said. “We bought a cake, and my husband had [the baker] write ‘baby’ on the top, and our oldest was just starting to read. It clicked, and her face lit up. They were ecstatic. They would come up, rub my belly and say, ‘Mommy, I hope this baby doesn’t die’.”

The Fretz family’s lives are full of the color pink, plenty of glitter, and princesses – and two little girls who are in love with their baby sister. Both girls endured the loss of their brother through difficulty, especially Michayla. They still discuss Walter, and Michayla tells her parents that she misses him and wishes God did not take him away. The girls and their parents are proud of the difference Walter is making.

“For someone who survived so few minutes outside of me, he’s left such an impact, more than I ever could,” Fretz said. “For someone so tiny, he’s touched so many. I hope he keeps educating the world and the masses as to what the preborn looks like on the inside – that it’s not just a blob – it’s not a clump of cells.”